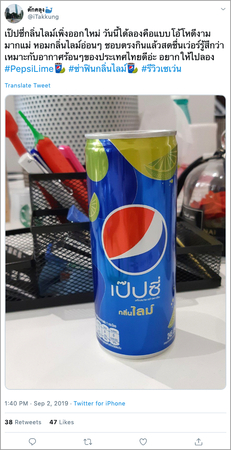 In Thailand’s hyper-competitive food and beverage marketplace, it's essential to know who your target is, what they are interested in and how best to communicate with them. Twitter allows brands to do just that.

People’s reviews of fast moving consumer goods, food and beverage products, and social commerce are rapidly growing trends on Twitter in Thailand with 7.5 billion conversations in the last year alone. And now PepsiCo (@PepsiThailand) has chosen to leverage Twitter's superpower – the conversations and audience – with their recent launch of their new Pepsi lime flavour (#PepsiLime).

Looking to drive awareness of the new flavour, PepsiCo tapped into Twitter's “leaned in” and influential audience with a unique only-on-Twitter marketing campaign, the company said in a Friday release.

Combining creativity with innovation, the #PepsiLime campaign was launched with a “promoted trend” – a paid-for link that appears at the top of the Trending Topics listing and is clearly marked “promoted” – and a unique emoji that is activated when users tweet with a #PepsiLime hashtag or a related Thai-language hashtag.

Emojis can provide an emotional link; they are popular with users and provide “stopping power”, meaning that when scrolling through their Twitter timeline people are more likely to stop when they see emojis. And customised branded-emojis, like those used in the #PepsiLime campaign, have the ability to supercharge a campaign on Twitter.

As part of their campaign, PepsiCo will be the first in Thailand to use the “Heart for Surprise” feature with an autoresponder, and will also be using the “Tweet to Unlock” feature as part of the campaign, in which a user “likes” a tweet and in doing so unlocks a surprise for them. Such activations are becoming popular on Twitter, providing brands with an unrivalled level of direct engagement with fans.

The #PepsiLime campaign is sustained through ongoing tweets using eye-grabbing videos, graphics and co-promotions, and engages with the audience through a fun narrative with clear calls to action throughout.

Laddawan Lertwasin, the senior marketing manager for PepsiCo Services Asia Ltd, said, “We have been active on Twitter for a long time and like how the platform enables us to gain valuable insight into our customers and target audience. The custom emoji used in our #PepsiLime campaign allows us to message users in a fun, brand-specific way. Being the first brand in Thailand to implement the “Heart for Surprise” feature with an autoresponder will allow us to engage with users on a deeper level.”

Arvinder Gujral, Twitter’s managing director for Southeast Asia, said, “We’re excited that PepsiCo have chosen to launch their #PepsiLime campaign in a unique only-on-Twitter way. The platform allows brands to be creative and engage with users in a meaningful way.”