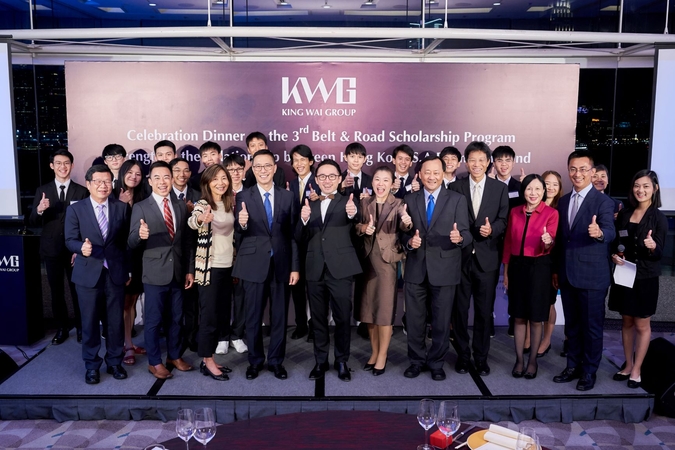 With Hong Kong and Thailand joining in China's belt and road initiative, the King Wai Group, a leading conglomerate in Hong Kong and China, fully lends its support in both business and charitable aspects.

The Hong Kong Scholarship Programme for "Belt and Road" students (Thailand), set up with donations from Dr King Wai Chan, founder and chairman of King Wai Group and the Hong Kong China Chamber of Commerce, have been successfully implemented for two years.

According to the Hong Kong Secretary for Education, King Wai Group's educational support had led to a 82 per cent rise to 69 in the number of Thai students enrolling in local post-secondary institutions in the 2018/19 academic year. Hong Kong hopes to achieve further internationalisation in the higher education sector by providing a series of scholarship in support of outstanding international students who will be staying in the territory.

Nuttha Soontrapa, Acting Consul-General of Thailand, thanked the King Wai Group for its educational support that also made many Thai students cultural ambassadors, helping to strengthen the bond between Thais and the people of Hong Kong.

The scholarship also presents a great opportunity for students of every background with many sharing their stories of how the scholarship had lifted them from financial burdens. For example, one of them is of Karen ethnic descent who grew up in a refugee camp in Thailand. She is now studying journalism at Hong Kong Baptist University.

"Many young people sink to hopelessness at the thought of being unable to afford further education, and many gave up searching for help. I am grateful to the Belt and Road Scholarship for letting students know that if they desire to pursue higher education, financial matters can not restrain them,” the student said.