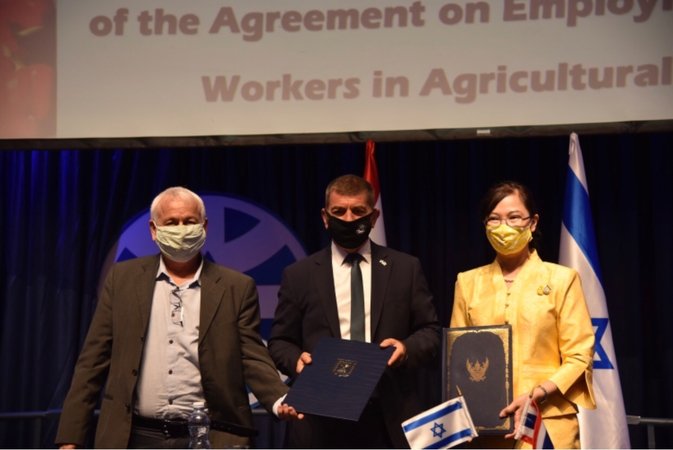 The governments of Israel and Thailand signed an agreement in Jerusalem today (July 13) to recruit a fresh batch of 25,000 Thais for agricultural work in the Middle East country, a press statement said. The agreement follows a bilateral pact signed in December 2010 to enable the recruitment of Thai workers in a “legal and transparent manner”. The 2010 agreement regulates the procedure to prevent illegal actions, including high charges which were paid by Thai workers to private recruitment companies.

“This agreement is a flagship project of bilateral relations between Israel and Thailand,” Israeli Ambassador Meir Shlomo said today. “I have no doubt it will continue to contribute significantly to more prosperity in Thailand and in Israel, and to enhance job creation especially during these times of economic difficulties.”

The new bilateral agreement is a significant milestone in the cooperation between the two countries as it forges a close connection between the two peoples, the statement said. Within this framework, tens of thousands of Thais have worked in Israel so far, under protected and respected employment.

Israel is considered an attractive work destination for Thais as they enjoy attractive income as well as legal protection of employment rights according to Israeli law.

“Moreover, these workers can transfer valuable knowledge in agricultural techniques from Israel to be put into practice in Thailand upon their return,” the statement said.

“Over the years, the dedication and hard work of Thai workers have greatly contributed to success in Israeli farming, which is recognised worldwide as a global leader in agricultural technologies,” the statement said.

“We sincerely thank the Labour Ministry and the Thai government for successfully holding intensive negotiations during recent months, despite the very challenging circumstances of the Covid-19 pandemic,” the ambassador added.