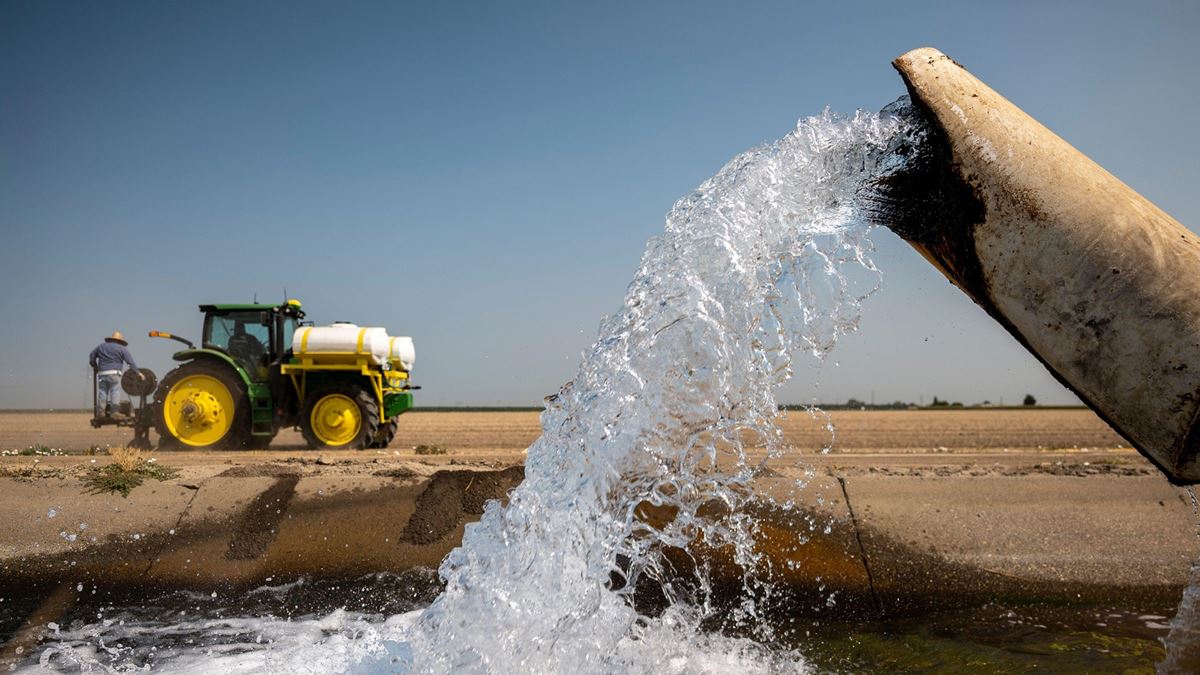 If youve eaten sushi anywhere in the U.S., chances are the rice came from Californias Sacramento Valley. Fritz Durst, a sixth-generation farmer, has grown the grain and other crops there for more than four decades. But this year, amid a historic drought, Durst is planting only half as many acres of rice as usual.

Farmers like Durst would be having an even worse year if it weren't for water siphoned from the Sacramento River to irrigate fields. Those diversions, though, have dire consequences for another part of the sushi supply chain: The salmon industry. Low water levels and scorching weather have raised river temperatures so much that almost all the juveniles of an endangered salmon species could be cooked to death this fall, state wildlife officials have said.

The drought is so extreme that California regulators earlier this month voted to restrict river diversions for some farmers to protect drinking water supplies. But that's unlikely to end to water-rights disputes between farms and fisheries, which have tussled in court for decades. As hotter and drier weather drains reservoirs and withers crops, the fight is growing even more fierce, underscoring how climate change is pitting multibillion-dollar industries around the world against one another in a battle for increasingly scarce resources.

"We should be shifting our focus from thinking about drought as an emergency that occurs once in a while, to thinking about it in the context of a long-term shift," said Jeanine Jones, interstate resources manager at the California Department of Water Resources.

In California, the agriculture industry's massive water consumption has long been a sticking point for fisheries, environmental groups and other stakeholders. Farms use about 40% of the state's water on average, according to the nonprofit research group Public Policy Institute of California.

Water rights in California are governed by a complex system that dates back to the Gold-Rush era. Senior rights holders -- companies, farmers and cities with claims that were acquired before 1914, and landowners whose property borders a river -- are the last to see their supplies curtailed. They wouldn't be affected by the measures approved earlier this month to restrict flows to some farmers.

Competition for water isn't unique to California, however. In Brazil, the Parana River Basin is experiencing its worst water crisis in 91 years, leaving farmers dependent on the river to vie with hydropower plants that provide electricity and water to the country's industrialized south.

Rice, typically cultivated in flooded fields, is among the world's most water-intensive crops. Government data reveals the toll drought is having on California's rice growers, which generate more than $5 billion and 25,000 jobs for the state annually, according to the industry-funded California Rice Commission. In a typical year, the state accounts for about two-thirds of U.S. production of medium- and short-grain rice, the kind used in sushi. By late June, California plantings were 19% below year-earlier levels and the smallest in almost three decades, a U.S. Department of Agriculture report showed.

Lower output will likely translate to higher prices consumers. California farmers can expect to get $22 per 100 pounds of of medium- and short-grain rice for 2021-2022, the most in 13 years, the USDA said.

Tony Gentile, co-owner of Flagship Restaurant Group, which owns 16 sushi bars in six states, said the company has raised menu prices across all of its restaurants in recent weeks as rice and seafood become more expensive and labor costs climb. Though Flagship uses California rice, it's considering sourcing the grain from Japan or other markets outside the U.S., Gentile said."Prices now fluctuate day to day more than any other time that I can remember, and I have been in the restaurant business for more than 20 years. It's scary," he said.Rice isn't the only crop decimated by drought, of course. Dry conditions have had a devastating impact across California's agriculture industry, which supplies over a third of U.S. vegetables and two-thirds of its fruit. After years of what seems like permanent drought, farmers have started ripping out almond trees, which are typically a 25-year investment.

Fisheries and some environmental groups argue that the drought's impact on salmon has been even more severe, however. Young salmon are typically released from hatcheries into rivers, where they make their way into the Pacific Ocean. But water temperatures in some rivers have climbed so high that state officials are trucking the fish to cooler areas until conditions improve. Commercial and recreational ocean salmon fishing contributes more than $900 million each year to California's economy, according to the state's Department of Fish and Wildlife.

"Cities like San Francisco and Oakland were once major West Coast fishing ports, but as we've diverted water from our rivers and destroyed fish nursery habitats in the rivers and the bay, those fisheries have collapsed," Rosenfield said.

A previous collapse of the salmon population in 2008 forced fisheries to close in droves. With her income gone, Sarah Bates, who's been fishing in the San Francisco Bay Area for 15 years, took a desk job temporarily. Some of her peers went into the construction industry and stayed there, she said.

Changes by the Trump administration to limit the scope of protections under the Endangered Species Act could further heighten risks to the salmon population, environmental groups say. The Biden administration is reviewing the revisions.

Environmental groups have argued that the California water rights system unfairly benefits the agricultural industry. They say the damage done to the salmon could have been avoided regardless of the drought, heat waves and climate change if water allocations were better managed. But rice farmers contend that their industry is essential to the state's economy, and that flooded rice fields provide food and a resting place for millions of migrating birds.

"Our society is going to have to decide what it is that's important to us," Bates said.