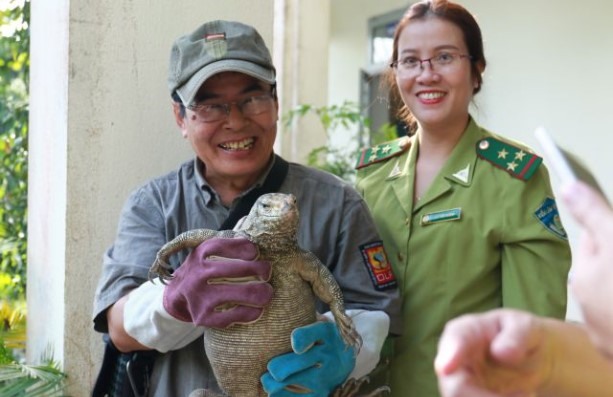 CENTRAL REGION — At least 86 per cent of advertisements for illegal wildlife products in hotels, restaurants, bars, pet shops and herbal medicine shops in Thừa Thiên-Huế, Đà Nẵng and Quảng Nam were removed by local authorities in 2019 and 2020.

A survey from the Education for Nature Việt Nam (ENV) was recently released from a wildlife violation reduction campaign that took place at 1,369 sites in the three localities in 2019 and 2020.

ENV said Đà Nẵng had the highest rate with 94 per cent of violation cases successfully dealt with, while Thừa Thiên-Huế and Quảng Nam followed with 88 per and 77 per cent, respectively.

It said 81 restaurants and herbal medicine shops out of 1,369 sites had made wildlife-related violations, 5.9 per cent, lower than the figures in Hà Nội (11 per cent) and HCM City (8 per cent).

ENV also said wildlife-related crime agencies had received 51 calls from local residents on wildlife violations in the localities in 2019 and 2020 and 49 cases were then arrested or destroyed, saving living animals in 22 of 38 cases.

The successful prevention of wildlife violations in the region resulted from the efforts of wildlife-related crime agencies during the two-year campaign.

Đà Nẵng was the first city in central Việt Nam to launch the campaign ‘Say No to wildlife consumption’.

Đà Nẵng's location and traffic connections make it a hub of wildlife trafficking routes from the Central Highlands region to northern provinces.

Thừa Thiên-Huế, Đà Nẵng and Quảng Nam are the richest biodiversity sites in Việt Nam with two conservation centres of saola – the Vũ Quang ox, spindlehorn, or Asian bicorn, the saola – one of the world’s rarest large mammals found only in the Trường Sơn Mountain Range of Việt Nam and Laos.

The region is home to the national parks Bạch Mã in Thừa Thiên-Huế and Sông Thanh in Quảng Nam Province, while Đà Nẵng has Sơn Trà and Bà Nà-Núi Chúa reserves with the largest population of the endangered red-shanked douc langur in Việt Nam. — VNS