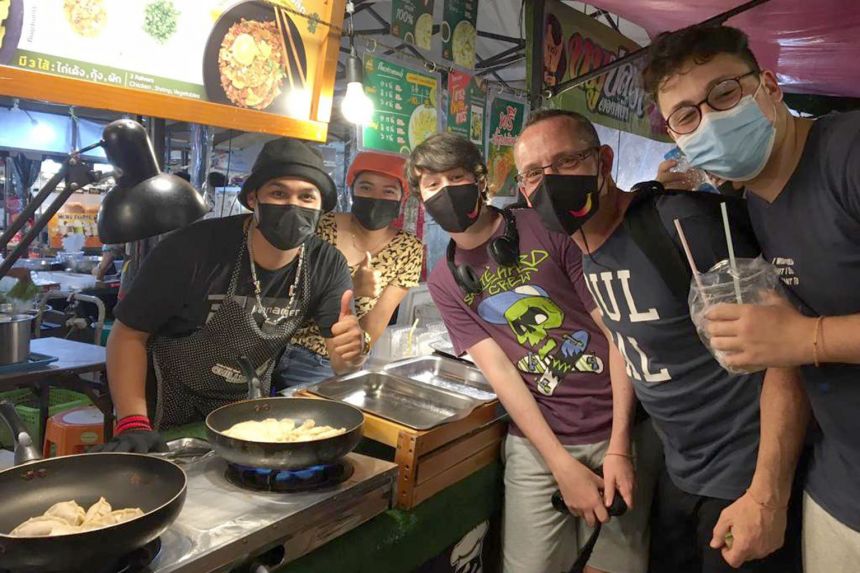 BANGKOK - The result slip of their Covid-19 test was slid under the door of their Phuket hotel room on Friday morning (July 2).

With that, British couple Stuart and Angela Lucy Smith left their room for breakfast and lounged by the pool at Wyndham Grand hotel, just one day after landing in the Thai resort island.

Hotel employees lavished their attention on the Smiths, who are among the inaugural batch of vaccinated foreign tourists allowed to roam the island province without undergoing quarantine as part of its "sandbox" scheme.

It marks Thailand's latest attempt to reboot its battered tourism industry even as the country battles a surging third coronavirus wave centred on Bangkok.

"I think nearly every member of staff has come over and welcomed us and thanked us for making the effort to come," Mrs Smith, 47, told The Straits Times on Friday night.

The couple, who are educators based in Qatar, had to brave an array of rule changes by the Thai government. But they were determined to restart their annual summer holidays in Thailand - something they missed last year as global travel ground to a halt amid the pandemic.

They received their final approval for the trip just one day before their flight.

On their first day out and about in Phuket, they had the whole hotel swimming pool to themselves until late in the afternoon. They ate satay and spring rolls as the bartender plied them with cocktails.

"We spent most of the day at the pool bar relaxing with the staff here, who spent a lot of time making different cocktails for us, and telling us the bar is new and looking for new ideas and things," she said.

It was only in the evening on Friday when they ventured out of their hotel around Nai Harn beach did they see up close how the pandemic had devastated Phuket.

Before the pandemic, tourism accounted for a fifth of Thailand's economy and more than 90 per cent of Phuket's.

"(In the past) we would spend most of our time going to restaurants where there were local food and... older ladies doing the cooking. We love that," Mrs Smith said. "But this evening we didn't see many of those open, which was quite sad. It was more of the Western restaurants and bars."

Where the roads used to buzz with scooters, they saw at most a dozen pass by the entire evening. "I have never seen it like this really," Mrs Smith said.

First-time visitor Jeremy Ansell, 51, who heads a technology start-up in Israel, has never seen Phuket when it was bustling. Yet, after roaming Kata beach on Friday where his family were the only tourists, he told ST: "It's a bit strange that it's so empty."

He wished he had visited Phuket before the pandemic. "Those who have been here before might know it for being crowded with all the bars and clubs," he said. "But now it's quiet, it's fantastic. Like being on your own private island."

About 1,000 tourists were given the green light to enter Phuket via the "sandbox" scheme from Thursday to Saturday. The programme, to be expanded to other tourist destinations like Samui and Krabi, allows vaccinated tourists to roam selected areas where sufficient numbers of residents have been inoculated and strict health protocols implemented.

These tourists, from lower-risk countries, are free to travel to other parts of Thailand after 14 days - the length of time that arrivals via other channels would have to quarantine themselves.

Thailand welcomed some 35,000 international visitors from January to May this year, compared with almost 40 million in 2019 before the pandemic struck.

It is unclear if this deadline can be achieved, with just 2.9 million of Thailand's  more than 66 million population fully vaccinated as at Saturday, and the daily rise in infections at 6,230, with 41 deaths.

Physicians based outside Bangkok have been redeployed to the capital as field hospitals fill up. The Bank of Thailand recently cut its full-year economic growth projection from 3 per cent to 1.8 per cent.

Mr Peter Webster, regional general manager for Singapore, Thailand, Myanmar, Laos and Cambodia at Hilton, which has two resorts in Phuket, said they have welcomed guests from Abu Dhabi, Germany and Israel, and have upcoming reservations from the United States and Europe.

"This (Phuket sandbox) is a significant move to elevate international confidence in Thailand as a travel destination," he told ST. "We will have to wait for a few more weeks to assess the prospects of this scheme, but the fact that a first step was taken means a lot for the Thai tourism community."

Smaller-scale tourism players like Mr Adul Minyong, who was forced by the pandemic to stop driving his taxi and instead do construction work, hope the benefits will trickle down to them.

"The sandbox is a good policy. It keeps customers safe, and it keeps us safe, if we all stick to the rules," he said.

Mrs Smith is aware of Thailand's continuing struggle with Covid-19 but is confident that her mask-wearing, safe distancing and sanitising practices will reduce her risk.

"The numbers are going to go up and they are going to go down. And I think this unfortunate pandemic is not really finished," she said. "And I am so aware that Thailand really needs to get some people in to spend some money. Tourism is such a big business for them."