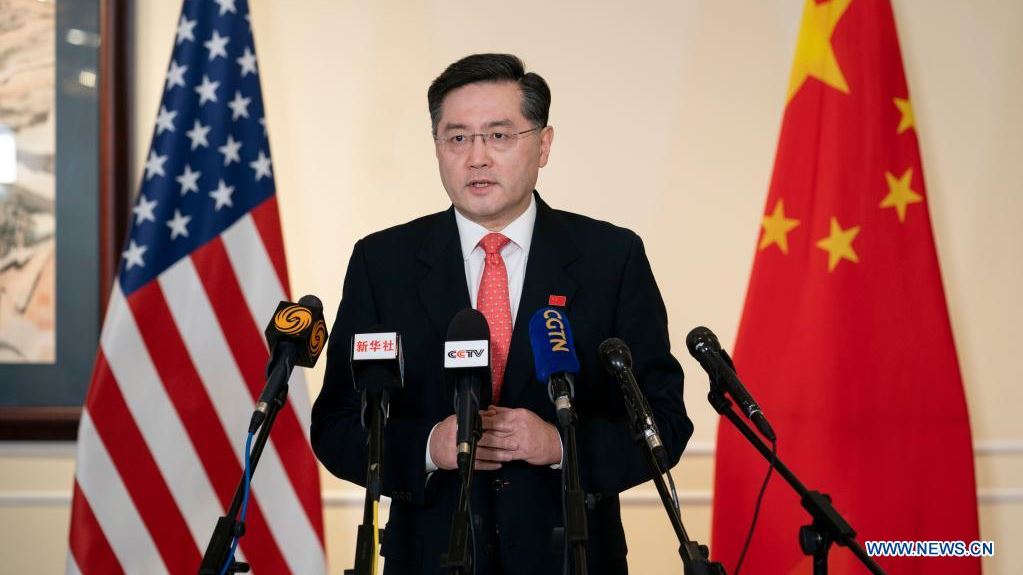 Four years ago, Qin Gang, then assistant foreign minister and director of the Foreign Ministry's protocol department, received the copy of credentials from Terry Branstad, who came to Beijing to serve as United States ambassador to China.

On Wednesday, Qin arrived in Washington as Beijing's new top envoy to the largest economy in the world, urging that "the door of China-US relations, which is already open, cannot be closed".

"Bridges" and "path" stood out as keywords in several statements or messages he delivered upon arrival to local media, netizens, the Chinese community in the US and students from China.

He highlighted the need to build bridges between the two nations and find a path for the peaceful coexistence of the two countries with different political systems and cultures.

Qin's remarks demonstrate Beijing's clear sincerity to keep one of the world's most important bilateral relationships afloat, as well as the great challenges and difficulties both sides have to tackle, experts and business organizations said.

"Through his remarks upon arrival, Beijing issues the clear signal that the door for cooperation is wide open despite the currently difficult relationship," said Yuan Zheng, deputy director of the Institute of American Studies of the Chinese Academy of Social Sciences.

Qin assumes his post as the world keeps a close eye on China-US ties, which lately have been strained by US attacks on issues including COVID origin tracing, Taiwan and Xinjiang.

He succeeds Cui Tiankai, who was ambassador for eight years, leaving the post in June. With a background in handling European affairs, Qin, 55, became known to more people as a spokesman for Foreign Ministry.

His arrival in the US came shortly after US Deputy Secretary of State Wendy Sherman's two-day China visit, which wrapped up on Monday.

During talks with Sherman in Tianjin, Beijing put forward two lists to Washington about the "US wrongdoings that must stop" and "key individual cases that China has concerns with". It also singled out three areas where it said the US is not to cross the line－China's political system, development and sovereignty.

While addressing Chinese and US media in Washington, Qin said the China-US relationship "has once again come to a new critical juncture", and he seeks to translate into reality the "mutual respect, equality, win-win cooperation and peaceful coexistence" of the two countries.

"I look forward to working closely with them to safeguard the foundation of China-US relations, uphold the shared interests of the two peoples, and endeavor to bring China-US relations back on track," Qin added.

Yuan, the CASS scholar, said that Qin's assuming his post in Washington "marks progress already in the two-way ties" and shows a certain degree of consensus worked out by diplomats from both sides.

"The new Chinese ambassador's remarks sound friendly. Still, Beijing will not back down on issues that matter to its principles," Yuan said.

Qin's remarks show that China "is still taking a productive, progressive approach (toward the US ties) and has no intention of confrontation", Yuan added.

Douglas Barry, senior director of communications and publications with the US-China Business Council, said the organization is "delighted to welcome the new ambassador".

"We encourage both governments to redouble efforts to meet regularly in good faith and open minds to resolve disagreements－some of which affect not just our two countries but the world," Barry said.

Recent bilateral diplomatic interactions show that Washington has a one-sided definition of its cooperation with Beijing, as it has been seeking US-China collaboration in a limited number of areas, such as the Iran and Korean Peninsula nuclear issues and climate change, an expert said.

Su Xiaohui, deputy director of the Department of American Studies at the China Institute of International Studies, said: "On one side, the US expects China to serve its interests, and on the other side, it continues suppressing and containing China. It is impossible for China to accept such a scenario."

"A reasonable view on cooperation must be based on mutual respect, equality and mutual benefit, and China has made this principle clear to the US," Su added.

Terry Branstad left his post as Washington's top envoy in Beijing last year. Washington has not yet announced its next ambassador to China.