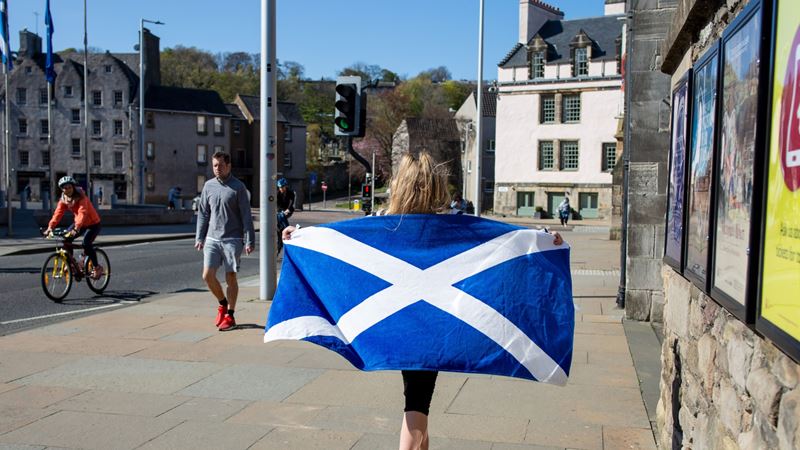 A week that could set in motion the eventual collapse of the 314-year union between England and Scotland is concentrating City trading desks on market disasters ahead.

As Scots enter a May 6 vote pitched on whether there should be a second independence referendum, fund managers and sell-side strategists see potential for massive chaos across the U.K.'s economic landscape in the years to come. Yet in an echo of the early days of the Brexit poll, few are hedging for this disruptive prospect.

While the stakes could hardly be higher, it's not clear the U.K. government will agree to another referendum, even if pro-independence parties win a majority on Thursday. But with the vote stirring uneasy memories of Britain's split from the European Union, fund managers are dusting off old playbooks for how to trade a binary risk event where timing is everything.

"You'd have massive uncertainty, financial chaos and recession," and a 10% devaluation of the pound, said Mark Nash, a money manager at Jupiter Investment Management.

Nash isn't hedging such a scenario yet -- and neither is the market. The median of forecasts in a Bloomberg survey has the pound holding at $1.39 through June.

Still, a handful of investment analysts have ventured forth bearish calls.

--Strategists at Credit Agricole recommend shorting the pound versus the dollar, with political risk over Scottish independence among the reasons.

--Barclays abandoned a call to go long on the pound versus the euro on the potential for pre-election volatility.

--UBS Group credit strategists cut their outlook on a select group of U.K. bank bonds to neutral from overweight, warning that the "long U.K. trade" in credit could unravel on referendum risk.

One thing is for certain: if things escalate, money managers will need to move fast. Odds show a repeat of the 2014 referendum, where Scotland voted to remain, would be too close to call.

"Markets ignore things and ignore things and ignore and then suddenly panic. I have a feeling that is quite likely to happen with the Scottish independence issue," said Jane Foley, head of currency strategy at Rabobank. "What I'm telling our clients is to be aware that even though this may not impact the pound right now, it'd be foolhardy to ignore it because it might suddenly come into the market's agenda."

Consequences of secession would be huge. Negotiations would be necessary over what currency an independent Scotland would use, whether it would take a share of the British national debt, and what trade arrangements it would have with the remainder of the U.K. The Scottish National Party also harbors ambitions to bring Scotland into the EU, a situation that would create huge border and trade tensions, if the problem of ring-fencing Northern Ireland in Brexit is any example.

"I wonder whether markets have actually considered the full ramifications of this election," said Julian Howard, director of multi-asset solutions at GAM Investments, whose portfolios are strategically positioned for a decline in sterling. "It would be a lot worse than Brexit as Scotland is much more closely stitched to the U.K. than Britain was into Europe. We're talking since the 1700s rather than the 1970s."

The domicile of financial institutions could also be contested. If they were to remain based on Edinburgh, Scottish banks would miss out on the support of the Bank of England's quantitative easing program and become less creditworthy, according to Charlie Parker, managing director at boutique investment manager Albemarle Street Partners.

It's the kind of tail-risk event that makes careers, for those with enough foresight to get it right.

At Nomura Holdings, strategist Jordan Rochester was part of a team that developed a money-spinning model to help the bank call the 2014 referendum result early. His political analysis on the split from the EU then led him to be nicknamed Mr. Brexit. Now he says the pound could fall up to 6% if Scotland voted to leave, depending on how priced it was prior to the result.

But even he isn't worried about the election on Thursday itself, and says the pound could even be in line for gains if the SNP fails to win more than half of the seats, as some polls suggest. Still, the independence cause could prevail once Green votes are counted, and an actual referendum date could trigger heavy hedging.

"The market will look at polling in a new referendum and treat it much more like a tighter vote than 2014 -- when it was only last-minute scares, not months in advance," Rochester said.

Even though the prospect of an invigorated Scottish break-away movement is scary for traders, derivatives markets remain relatively calm. The term structure of sterling's implied volatility has become inverted, signaling angst over events on Thursday -- though the cost of insuring swings is still below its 12-month average. Over the longer-term, five-year risk reversals in cable trade near their average since Bloomberg began compiling data in 2005.

"The difficulty with assessing the impact of these events on markets is that even if we know they are on the horizon, we don't know when markets will react and if in the end the status quo will prevail," said Sheena Shah, currency strategist at Morgan Stanley. Her firm sees a 30% chance of a referendum by the end of 2024. "There are so many unknowns and follow-up hurdles."