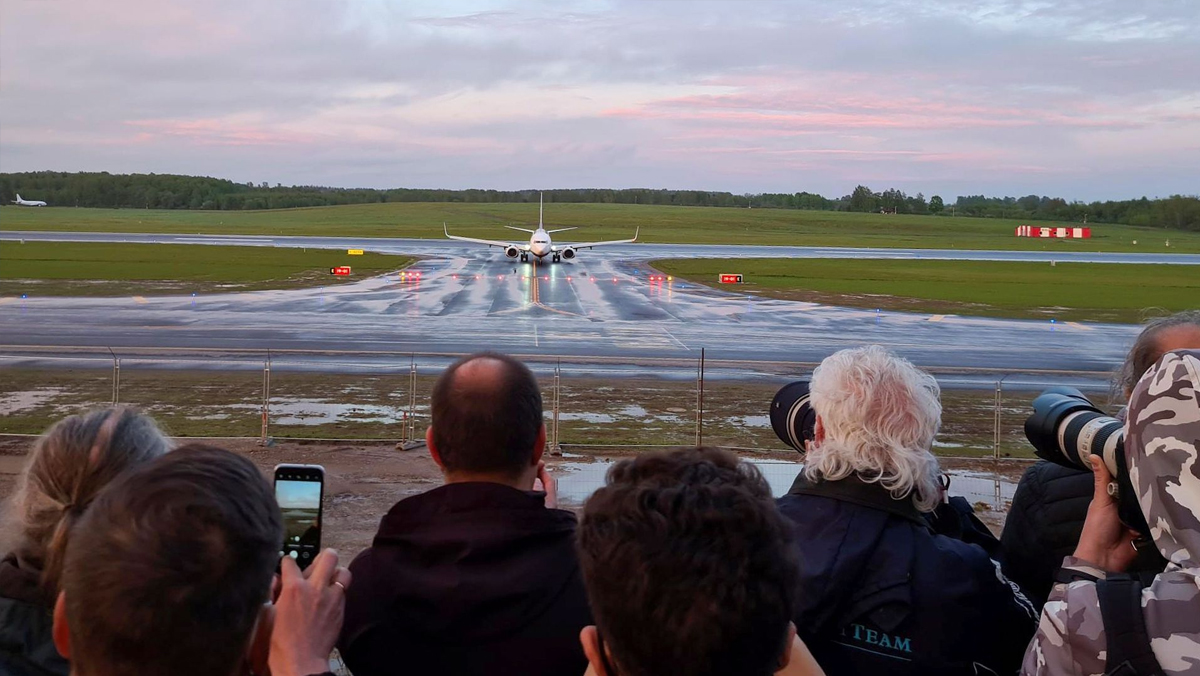 MOSCOW - Belarusian authorities on Sunday forced a civilian jetliner that was traveling over the country to land in Minsk and arrested an opposition journalist on board - an act that some European leaders compared to a hijacking.

The seizure of the Ryanair flight traveling between Athens and Vilnius, Lithuania - the capitals of two NATO nations - had little recent precedent, and European leaders said they were considering sanctions against Belarus.

Minutes before the Ryanair flight was to exit Belarusian airspace and cross into Lithuania, its crew received an order from Belarus's air traffic control to turn around because of possible explosives on board. A Belarusian MiG-29 fighter jet scrambled to escort the Boeing 737-8AS to Minsk, though the aircraft was at that point much closer to Vilnius.

The Belarusian opposition said the supposed bomb scare was a pretext for the real reason strongman President Alexander Lukashenko ordered the plane carrying 123 passengers to land: the arrest of Roman Protasevich, an opposition journalist on board.

Lukaschenko, who has been in power since 1994, has cracked down on dissent since claiming a sweeping victory in last year's elections. The claim, which has been rejected domestically and internationally, fueled months of popular protests; most of the opposition is exiled or jailed.

The news service for the airport in Minsk, the Belarusian capital, said no bomb was found on the plane. Lukashenko personally ordered the fighter escort, the BelTA state news agency said.

European Commission President Ursula von der Leyen said Sunday that those responsible for the "hijacking must be sanctioned." She wrote on Twitter that European leaders would discuss what "action to take" at a previously scheduled meeting Monday in Brussels.

"Faking a bomb threat and sending MiG-29s to force @Ryanair to Minsk in order to arrest a @nexta journalist on politically motivated charges is dangerous and abhorrent," she wrote on Twitter.

In November, he was added to a list of individuals purportedly involved in terrorist activities. He has been living in exile in Vilnius.

Before departing Greece early Sunday, Protasevich said on his Telegram channel he may be under surveillance. He was detained upon the plane's landing. He now faces more than 12 years in prison.

The ICAO said it was "strongly concerned by the apparent forced landing of a Ryanair flight and its passengers, which could be in contravention of the Chicago Convention."

Ryanair said Belarusian air traffic control notified its crew that there was "a potential security risk on board" and instructed it to divert "to the nearest airport, Minsk." But the plane was much closer to the Vilnius airport than it was to the one in Minsk, the Flightradar24 website shows.

Nothing untoward was found, Ryanair said in a statement. The flight departed Minsk, without Protasevich, at 7 p.m. local time in Minsk.

A senior European diplomat, speaking on the condition of anonymity because of the sensitivity of the unfolding situation, said European policymakers would need to discuss whether it was still safe to fly over Belarusian airspace.

Flights in Northern and Eastern Europe often try to avoid Russian airspace. If Belarusian airspace is also a no-go, north-south flights in Europe could become circuitous.

Protasevich had been in Athens taking photographs during a visit by Tikhanovskaya to Greece, so his whereabouts would have been public to anyone with an interest. The senior diplomat noted that investigative open-source outlets such as Bellingcat have been able to purchase flight manifests and that it would probably not have been difficult for Belarusian authorities to gain access to information about Protasevich's travel plans.