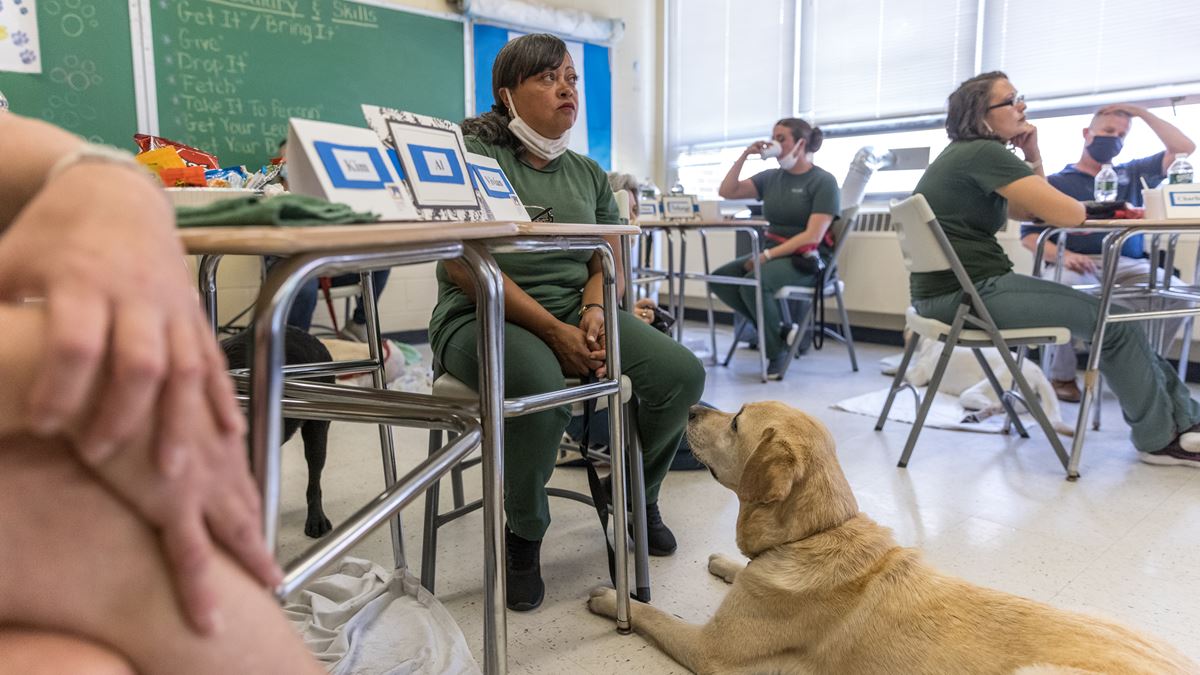 NEW YORK - New York Police Department First Deputy Commissioner Benjamin Tucker knows that what an officer sees on the job can have an impact for many years.

He still remembers the deadly gang-related arson when he was a beat cop in Brooklyn in the 1970s, and the unsolved murder of a man he found lying on the pavement, the bullet wound behind his ear not yet visible.

In 2019, when the nation's largest police department grappled with a record wave of officer suicides, Tucker brought those memories with him as he and other department brass brainstormed how to alleviate job-related stress.

Enter Jenny and Piper - newly-minted yellow Labrador retriever detectives with the NYPD's Employee Assistance Unit. Their cuteness and caring demeanor will help connect with officers who face growing tension on the streets and may be quietly suffering from work or personal issues.

In the wake of the killing of George Floyd in police custody and the Jan. 6 breach of the U.S. Capitol, anti-police fury is "tremendous" and "exponentially more palpable than it has been in the past, said Tucker, who presided over Jenny and Piper's swearing-in ceremony at police headquarters earlier this month.

Assaults on officers are increasing, and communities across the country are facing calls to "defund the police." Beat cops routinely face catcalls - and a wall of cellphone cameras set to "record" - when carrying out daily duties.

Services provided by the EAU are confidential, and the unit will refer troubled cops to counselors outside of the department anonymously if they wish.

Law enforcement agencies around the country increasingly are turning to emotional support dogs - a departure from K-9 programs where animals search for drugs, weapons and explosives, control crowds or track down missing people.

"Law enforcement officers go to work every day and do a job most people wouldn't do for a million bucks," said Patrick Yoes, National President of the Fraternal Order of Police, describing how officers on patrol have been villanized over the past 18 months. "To have people turn on us the way that they did . . . I think it took a toll on every officer."

The women are housed in their own unit; their K-9 trainees sleep beside them in cells.

Tiffany Richway, 29, is serving an 11-year sentence on a high-level drug conviction in a remote upstate county, near the Canadian border. Richway said the K-9 program has given her purpose as she works through her sentence.

"It makes prison so much easier," she said. "It gives you something to wake up for."

Richway said she and her colleagues in the program only recently began training therapy dogs for use in police departments. They were already training dogs for other jobs, including to comfort veterans suffering from post-traumatic stress disorder, or PTSD.

At the prison, the NYPD officers were paired with inmates who trained them to become Jenny and Piper's handlers and backup handlers. The pairing of convict coaches and cops was odd at first, according to some of the inmates and officers. But they quickly saw the importance of their common purpose.

Sgt. Anthony Manza, who is Piper's backup handler, said the dogs "have an uncanny ability to spot a person in need and offer unconditional compassion." Some therapy dogs are used to ease the stress of domestic violence and sexual assault victims, often with a tactic called "tell me a story," in which the therapy dog sits on the lap of an ailing person as they are asked to convey a traumatic event.

"It is our intention to bring techniques like this to cops in crisis, to smash through the wall that stigma behind mental health has built, to get officers to open up in situations where they might not normally open up, including thoughts of suicide," Manza said.

In Fairfax County, three police dogs make several rounds of random check-ins with officers each week, while also responding to critical incidents and any situation that may be difficult for officers, said Lt. Christopher Sharp, who commands the Incident Support Services unit.

The dogs tend to disarm officers who could benefit from help but might not otherwise feel comfortable talking freely with a colleague, Sharp said. They are also used in the community - appearing at National Night Out and other public events.

Patrick Yoes, the national FOP president, said police therapy dogs are "sorely needed," especially if used in a way that keeps officers from feeling like they will face reprisal for seeking help or counseling. The dogs, he said, are skilled at getting big "manly" cops to "sit on the floor and play with them."

Four officers who were at the Capitol on Jan. 6 have since taken their own lives.

Many officers who survived the attacks at the Capitol continue to suffer from mental as well physical injuries.

Attacks on officers across the country are on the rise, according to statistics complied by the FOP, with 185 officers shot, including 35 killed, through July. The organization said ambush-style attacks are up 126 percent from last year, with 67 cops shot in 52 incidents. Earlier this month, two Chicago police officers were shot, one fatally, during a traffic stop.

Now a spokeswoman for the National Police Association and a police trainer, Smith often brought Marley, her German shepherd rescue, to courses she teaches with her husband around the country.

Marley, who died recently, had a knack for cozying up to officers in her training sessions who had been in a shooting or who had experienced another kind of trauma, Smith said.

While she was on the job, her pets were always a source of comfort. In her recent eight-month stint of treatment for breast cancer, her pair of terrier mixes were a loving presence that helped her get through.

"That's one of the reasons I so strongly believe in these programs - is because I have seen with my own personal experiences what dogs mean to people, [and] what dogs have meant to our family," Smith said.