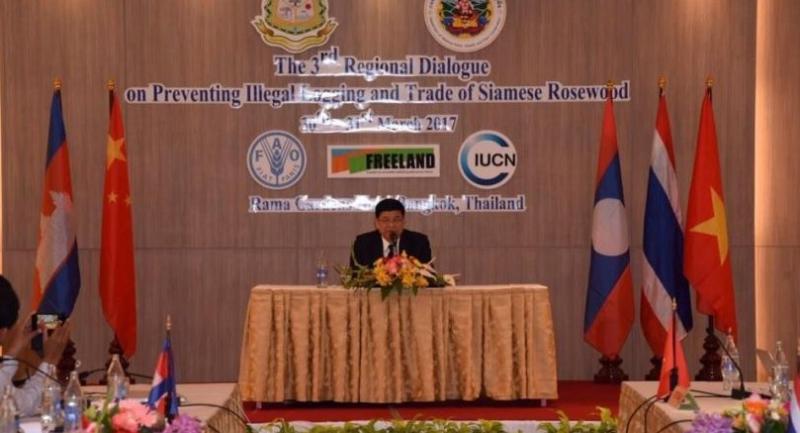 Suppression of illegal logging and trade of phayung wood (Siamese Rosewood) as well as ways to improve transborder legal enforcement are among the issues being discussed during a two-day conference of the Mekong countries and their counterpart, China.

Thanya Netithammakul, head of Thailand’s National Parks, Wildlife and Plant Conservation Department, said on Thursday during the opening of the conference that the event was set up after a request by the World Heritage Committee, which in recent years has been reviewing the status of the Dong Phayayen-Khao Yai Forest Complex, a World Heritage site in Thailand.

Illegal logging of phayung, also known as Thailand rosewood or Siamese rosewood, has been noted as one of the most pressing problems challenging the area’s World Heritage status.

Phayung, native to the area, is heavily logged because of high demand from overseas, notably China. Trans-border logging gangs are known to be responsible for much of the crime, especially in Thap Lan and Pang Sida national parks, which are part of the forest complex.

Among other issues threatening the area’s World Heritage status are the heavy encroachment of resorts in Thap Lan and the expansion of Highway 304 cutting through the site.

Thanya said the heritage committee’s experts came to review the situation late last year and suggested that the body would continue its consideration of whether to downgrade the status of the site to “World Heritage in Danger”, citing Thailand’s efforts to tackle the problem.

The country has until 2019 to resolve the issue, he said.