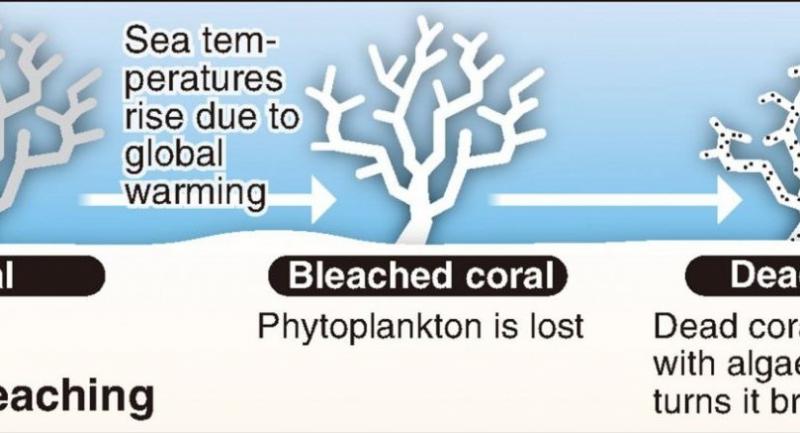 In an emergency countermeasures meeting of experts held in Okinawa Prefecture on Sunday, the ministry inked out the declaration, which states that coral could die out in the waters around Japan by the 2070s.

The ministry concluded in the declaration that it will mainly promote the development of new technologies to transplant and cultivate coral, and designate coral reef areas to prioritize conservation. It will also promote measures against global warming.

Experts and people engaged in the tourism and fishery industries expressed a sense of urgency over the bleaching and death of coral, seeking early action to conserve coral reefs, which are facing a mounting risk of extinction.

“At the current pace of global warming, there could be major coral bleaching every year all over the world,” an expert said at the emergency measures meeting in Okinawa Prefecture on Sunday. Another said, “It’s been predicted the coral habitat will disappear in the waters near Japan in the 2070s.”

Reports offering a grim outlook for the future of the coral habitat were presented one after another at the meeting, which was attended by over 50 experts.

According to an Environment Ministry survey, more than 90 percent of the coral in the Sekisei Lagoon in the prefecture, the largest such reef in the nation, has become bleached, and about 70 percent of it died in 2016. Sea temperatures rose last year due to global warming, and few typhoons approached the area, which kept cold and warm sea water separated.

The lagoon experienced mass bleaching in 1998 and 2007. The experts said last year’s bleaching was the worst ever recorded in the lagoon.

“We must take some action as soon as possible,” said meeting chair Makoto Tsuchiya, a professor emeritus at the University of the Ryukyus.

Those in the tourism industry are concerned that the mass bleaching and death of coral could deal a blow to the industry, given coral is an important tourism resource.

“It’s become difficult to find healthy coral in the Sekisei Lagoon,” said Tomoya Takeuchi, 35, secretary general of the Yaeyama Diving Association. The lagoon, where many tropical fish live, has attracted divers from around the world.

A 39-year-old executive of a diving shop on Ishigakijima island said he is concerned that death of coral could also affect other marine life.

Although there has not yet been a conspicuous effect on the local tourist industry due to the death of coral, Takeuchi said, “We should move ahead with activities to conserve coral with various organizations, to provide tourists with an opportunity to enjoy our beautiful sea.”

Yoshimi Higa, 53, who has cultivated coral in the village of Onna in the northern part of Okinawa Island, said he wants to preserve the ecological system.

“Death of coral would make the water look muddy, which will make it difficult to catch fish. We want to advance a plan to cultivate coral more for the preservation of the ecological system,” said Higa, who also is an executive member of the village’s fisheries cooperative association.

Bleaching reports up since ’80s

There have been increasing reports of coral bleaching worldwide since the 1980s, with many cases of serious bleaching being seen in the past few years.

According to the ministry, the worst coral bleaching so far took place from 1997 to 1998. Sea temperatures rose at that time partly due to the El Nino phenomenon, resulting in the loss of 16 percent of the world’s coral. About 40 percent of major coral in the Sekisei Lagoon died.

The same scale of mass coral bleaching hit the Great Barrier Reef in Australia, Hawaii, Samoa and other places from 2014 to 2016.

“Coral reefs account for only 0.6 percent of the global sea area, but they are home to 25 percent of all marine life,” said Hajime Kayane, a professor of coral reef studies at the University of Tokyo. “Should coral reefs be lost, fishery resources and the tourism industry will suffer a huge blow.”