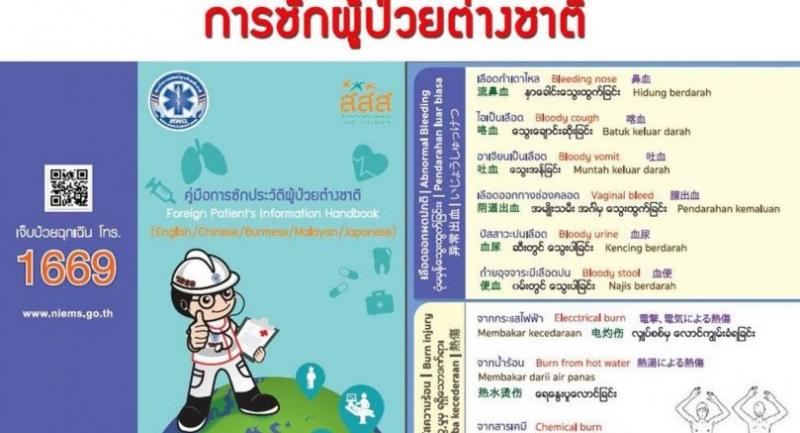 The National Institute for Emergency Medicine (NIEMS) has produced a handbook detailing patient symptoms in English, Chinese, Japanese, Burmese and Malay to smooth communications and patient referrals from accident scenes to hospitals.

The handbook was distributed along with language experts’ guidelines at a workshop on communication at the scene of accidents and emergencies held on Sunday as part of the 11th National Conference of Emergency Medicine at IMPACT Muangthong Thani.

NIEMS secretary-general Dr Atchariya Pangma said Thailand’s status as a popular tourist destination and a member of the Asean Economic Community (AEC) had led to a large number of foreigners visiting or working in the country and it was important to be able to communicate in emergency situations.

One speaker, Dr Waris Kupkanchanakul from Krabi Hospital, said Krabi often had issues with language barriers especially with Chinese tourists who often could not communicate in English.

The handbook would be useful for paramedics arriving at the scene to get essential information about a victim’s condition to provide information to hospitals.

The languages were decided upon after a NIEMS’s survey of the top five languages used by foreign visitors, he said. The handbook would hopefully enable medics to communicate with victims faster and more accurately, Waris said.

In the past, medics used Google Translate to help in communicating with patients but the service sometimes yielded inaccurate translations, Waris added.

The NIEMS will distribute copies of the handbook to medic teams in key tourist areas as well as at hotels. In the future, the NIEMS will produce more handbooks in other languages such as Russian, Lao and Cambodian, Waris said.