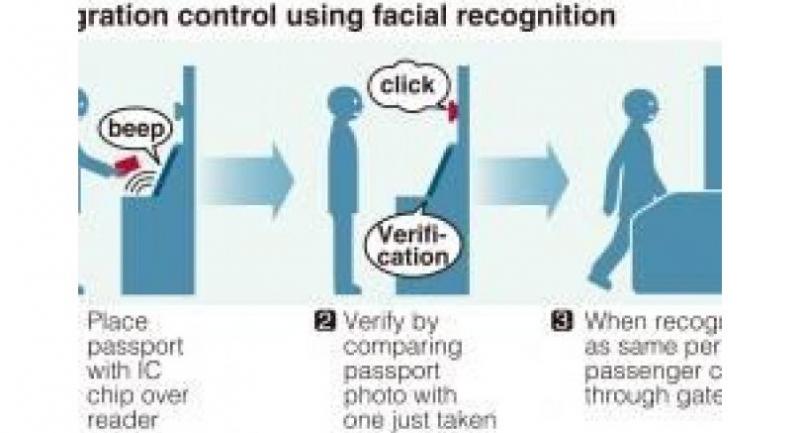 TOKYO — The Justice Ministry is considering immigration procedures for Japanese passengers using automated gates equipped with a facial recognition system for identity verification at major airports from next fiscal year, according to sources.

The facial recognition system will read photo data stored on an IC chip embedded in a person’s passport, comparing it with a photo taken at immigration facilities to verify the person’s identity. A passenger needs to hold their passport over a reader, which then takes their picture. If the person in the two photos is recognized as the same person, the passenger can pass through the gate. There is no age limit for passengers, and prior procedures are not necessary. Immigration examinations using the system are expected to be completed in about 15 seconds.

Three automated gates of this kind will be introduced at Haneda Airport in October, ahead of other airports, and will be used for immigration procedures for Japanese passengers arriving from abroad. In the next fiscal year, the automated gates will be gradually introduced at Narita, Haneda, Kansai and Chubu airports, which deal with about 90 percent of incoming and outgoing Japanese passengers. The ministry hopes to use the automated gates for immigration procedures for Japanese people arriving in and leaving from Japan.

According to the ministry, 2,680 immigration officers had been slated to conduct immigration procedures and other duties in fiscal 2016, with 80,440,737 people arriving in or departing from Japan in 2016. Of them, about 30.93 million were Japanese nationals who used Narita, Kansai, Haneda and Chubu airports. The four airports also dealt with about 34.67 million incoming and outgoing foreign passengers, with the number expected to further grow.

The government has aimed to shorten waiting times at immigration control to within 20 minutes or less. However, the average waiting time was up to 35 minutes at Kansai and 28 minutes at Narita and Chubu in 2016, falling short of that goal.

In 2007, automated gates using fingerprint authentication were introduced in Japan. However, passengers need to register their fingerprints in a prior application, so the usage rate among Japanese travelers was just 8 percent in 2016. The facial recognition system does not require prior procedures, which likely will help widen the use of automated gates equipped with a facial recognition system.

In order to introduce the facial recognition system, the ministry will revise ministerial ordinances that are relevant to the Immigration Control and Refugee Recognition Law.