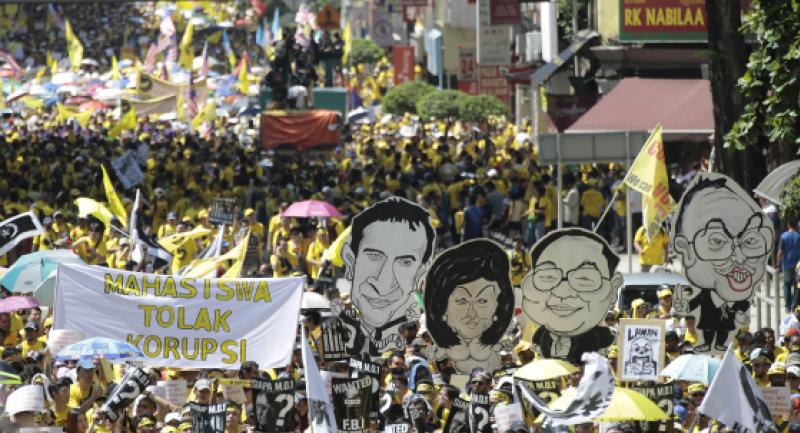 Tens of thousands of Malaysian protesters gather in the streets to step up pressure on Prime Minister Najib Razak to resign over alleged corruption during BERSIH (The Coalition for Clean and Fair Elections) 5.0 rally in Kuala Lumpur, 19 Nov 16./ EPA

KUALA LUMPUR - Rights groups condemned Malaysia's government on Monday for a crackdown on organisers of a weekend anti-government rally, including the arrest of the protest leader under a tough law aimed at terrorism.

Tens of thousands of people flooded Kuala Lumpur with the yellow colours of the reformist movement Saturday to demand Prime Minister Najib Razak resign and face justice over a massive corruption scandal.

Authorities arrested more than a dozen people before, during and after the demonstration including Maria Chin Abdullah, the leader of the "Bersih" civil society alliance that staged the rally.

Most detainees have since been released but Chin remains in solitary confinement under a national security law that allows detention without charge for 28 days and can bring a lengthy prison sentence.

"These arrests violate international human rights standards," it said, calling for all those arrested to be freed and all charges dropped.

The groups said they were especially "alarmed" at Chin's detention under a national security law introduced in 2012 by Najib's government with a promise it would not be used against political opponents.

"However, the authorities are instead using it to prevent the exercise of fundamental human rights, constituting an abuse of law," the statement said.

The protest was the second in 15 months by Bersih to highlight allegations that billions of dollars were plundered from sovereign fund 1MDB, Najib's pet investment project.

Najib, 63, and 1MDB deny wrongdoing. But the US Justice Department earlier this year detailed an audacious campaign of fraud and money-laundering by his family, associates and an unnamed "Malaysian Official 1" -- an apparent thinly-veiled reference to Najib.

Najib last year abruptly fired the attorney general and shut down domestic investigations. His government has increasingly throttled the media and whistle-blowers to contain the scandal.

Bersih, in a statement Monday, said Chin was being held in a tiny windowless cell with no mattress.

Bersih is "shocked and outraged that the authorities have gone to such extreme lengths to silence their critics", it said.

It called for international pressure on authorities and said nightly vigils would be held on her behalf at central Kuala Lumpur's Independence Square.

Critics accuse Najib's government of trampling rights following a 2013 election in which his ruling coalition lost the popular vote.

Since the 1MDB scandal exploded last year, opponents accuse him of an outright lurch toward autocracy to suppress it.

Last week a leading opposition politician was convicted of releasing confidential documents on the scandal, and the chief editor of the country's leading independent news website was charged over a 1MDB-related news video.