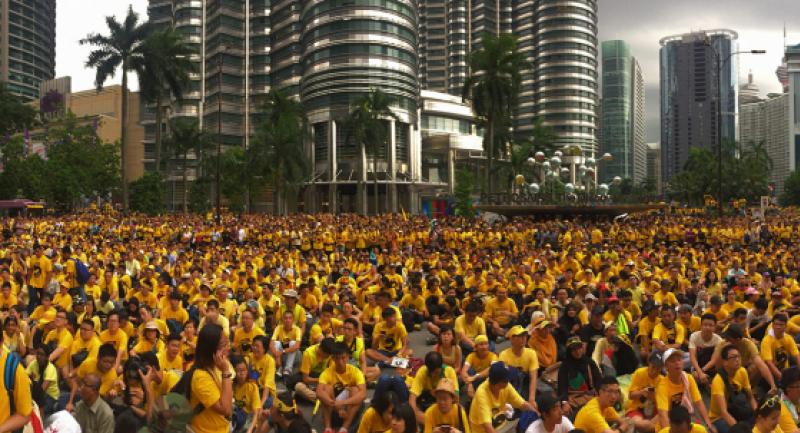 A panoramic image shows tens of thousands of Malaysian protesters seated in the streets to step up pressure on Prime Minister Najib Razak to resign over alleged corruption during BERSIH 5.0 rally in Kuala Lumpur, 19 Nov 2016./ EPA

KUALA LUMPUR - The US has said it is "troubled" by the detention of the leader of Malaysia's reformist group which staged a major weekend demonstration demanding Prime Minister Najib Razak quit over a massive corruption scandal.

Authorities arrested more than a dozen people before, during and after the demonstration including Maria Chin Abdullah, the leader of the "Bersih" civil society alliance that staged the rally.

"We are troubled by the ongoing detention and solitary confinement of Maria Chin Abdullah under national security laws," Alicia Edwards, a US State Department spokeswoman said in a statement provided to AFP by the US embassy in Kuala Lumpur Thursday.

Tens of thousands of people flooded the capital with the yellow colours of the reformist movement Saturday demanding Najib's resignation.

The US State Department added it was "further concerned" with the arrest of other organisers, activists, and politicians.

Most detainees have been released but 60-year-old Chin remains in solitary confinement under a controversial national security law designed to combat terrorism that allows detention without charge for 28 days and can bring a lengthy prison sentence.

Bersih's media officer, Yap Pik Kuan, told AFP Chin is currently being held at an unknown location in a windowless cell measuring 3.6 metres by 7.3 metres (12 by 24 feet), without a mattress and only a slab of wood on a cement floor.

There are two light bulbs kept on day and night.

"Her health is good at the moment but we're worried about the prolonged sleep deprivation because of the lights," Yap said.

Hundreds of activists have been holding nightly vigils for Chin, demanding she be released immediately.

The protest on Saturday was the second in 15 months by Bersih to highlight allegations that billions of dollars were plundered from sovereign fund 1MDB, Najib's investment project.

In a radio address last week, Najib dismissed Bersih as a "deceitful" tool of the opposition seeking "to unseat a democratically-elected government".