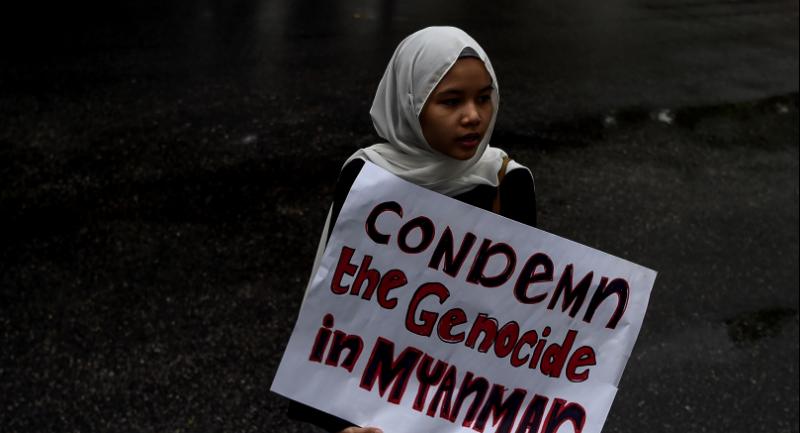 In this file picture taken on November 25, 2016 a Malaysian Muslim girl holds a placard following a protest against the persecution of ethnic Rohingya Muslims in Myanmar, outside the Myanmar Embassy in Kuala Lumpur. / AFP PHOTO / MANAN VATSYAYANA

KUALA LUMPUR - Myanmar's membership of Asean must be reviewed because of its "ethnic cleansing" of the Rohingya Muslim minority, a senior Malaysian minister warned Wednesday.

Khairy Jamaluddin said the 10-country Association of Southeast Asian Nations' principle of non-interference in member states' domestic affairs was void in the context of such violence.

Myanmar's army has carried out a bloody crackdown in the western state of Rakhine and thousands of Rohingya have flooded over the border into Bangladesh this month, making horrifying claims of gang rape, torture and murder at the hands of security forces.

"To Asean, we demand that Myanmar's membership in Asean be reviewed," Khairy, the youth and sports minister, told the annual gathering of the ruling party United Malays National Organisation.

"The principle of non-interference is void when there is large scale ethnic cleansing in an Asean member state."

A video highlighting the plight of the Rohingya was played during the minister's speech, local media reported.

"Let us raise our hands in prayer to Allah for the deliverance of the Rohingya people from injustice and from ruin," Khairy added.

On Tuesday, the UN's rights agency said the Rohingya may be victims of crimes against humanity, as former UN chief Kofi Annan arrived in the country for a visit that will include a trip to northern Rakhine.

Myanmar has denied allegations of abuse, saying the army is hunting "terrorists" behind raids on police posts last month.

But Muslim-majority Malaysia has recently upped its criticism of Myanmar for its handling of the crisis.

Last Friday, Kuala Lumpur summoned the Myanmar ambassador while around 500 Malaysians and Rohingya marched to the embassy in the Malaysian capital carrying banners denouncing the "genocide."

Malaysia's cabinet also issued a statement last week condemning the violence, an unusually strong criticism against a fellow Asean member, while Prime Minister Najib Razak will participate in a rally on Sunday to protest against the violence in Myanmar.