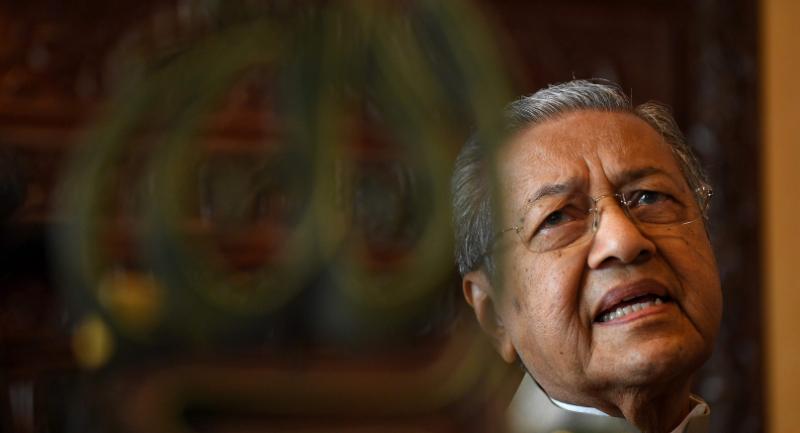 PUTRAJAYA, Malaysia - Malaysian ruling party icon Mahathir Mohamad has accused current leader Najib Razak of "destroying" the country by clinging to power despite a corruption scandal, and vowed to campaign vigorously for the opposition in coming elections.

In an interview with AFP, the 91-year-old former prime minister excoriated Najib over the sensational graft allegations swirling around the 1MDB sovereign wealth fund.

The man who strove to subdue Malaysia's opposition parties during his time in office from 1981-2003 said he could now work with them to topple Najib, including the party of his jailed former deputy Anwar Ibrahim.

"He (Najib) is destroying this country... he is bringing in racism... very, very serious crime has been committed," Mahathir said Tuesday at his office at Putrajaya south of the capital Kuala Lumpur.

In a July lawsuit the US Justice Department detailed how an unnamed "Malaysian Official No. 1" -- later identified as Najib -- and his family members and close associates diverted billions from 1MDB, which Najib founded.

Under mounting pressure over the allegations, the prime minister last year abruptly shut down Malaysian investigations, fired the attorney general and purged ruling party critics including his deputy Muhyiddin Yassin.

Najib, 63, and 1MDB have denied any wrongdoing.

Mahathir was once Najib's mentor but has since come out of political retirement to attack him over the debt-laden 1MDB. He has formed a political party in hopes of toppling the ruling United Malays National Organisation (UMNO).

"For me overthrowing Najib is far more important than any personal feeling I have about anything else," Mahathir said, in reference to patching up ties with Anwar and working with the opposition.

Anwar was heir apparent to Mahathir until he was sacked in 1998 over their political differences. Anwar was subsequently charged and jailed for sodomy, but the pair appear to see eye-to-eye over the 1MDB scandal.

At the rally Mahathir said Malaysia was "controlled by thieves" and called for a sustained push to topple the prime minister. Critics accuse Mahathir of hypocrisy, saying he also tolerated corruption and repressed dissent in his day.

Mahathir, who helped propel decades of economic growth for Malaysia, warned that if Najib were not ousted Malaysians were in for tough times amid rising prices of goods and a slowing economy on the back of mounting national debt.

"If he is not replaced, things will get worse," he said.

Looking healthy and cheerful, Mahathir predicted Najib would play the race card to win support in the Malay-majority multiracial nation before the next election due by 2018.

"He is going to be very Malay and very Islamic. He is moving away from that liberal attitude towards a more rigid and racist approach to the administration of this country," Mahathir said.

"He wants the election to be between Malays against Chinese or Chinese against Malays."

The ruling UMNO-dominated Barisan Nasional coalition which Najib heads has been in power since independence in 1957 and in recent months has adopted increasingly repressive actions against dissent, including jail terms.

Najib and UMNO no longer have popular support in Malaysia, Mahathir said, predicting the opposition could win the elections. "Wherever I go, people actually curse Najib," he said.

Yet just last week the prime minister told an UMNO gathering that he would "fight until the death" and showed no sign of succumbing to calls to quit.

Najib also labelled Mahathir as a traitor and warned of "nightmares" if UMNO lost and the Chinese-based Democratic Action Party came to power.

"Unless he cheats in the election, he (Najib) is not going to win," Mahathir said. "Most of our (new party) members are actually from UMNO. Among Malays the hatred for UMNO is unbelievable."

Chong Ja Ian, a political analyst from the National University of Singapore, said the opposition could do well but it faces hurdles.

"They don't have the resources that UMNO can bring to bear," he said.

Najib's position so far appears unassailable, with support from most of the 191 powerful UMNO division chiefs.

Mahathir said he considered it a national duty to topple Najib, even though the campaign is taking a toll on him.

"I know very soon I have to go the way other people go. I will die. But if I am alive and still capable, just to be selfish and think of my own comfort I think is wrong. I want to do something for this country.

"The main thing is they (the opposition) and I agree Najib is the destroyer of this country and Najib should be removed."