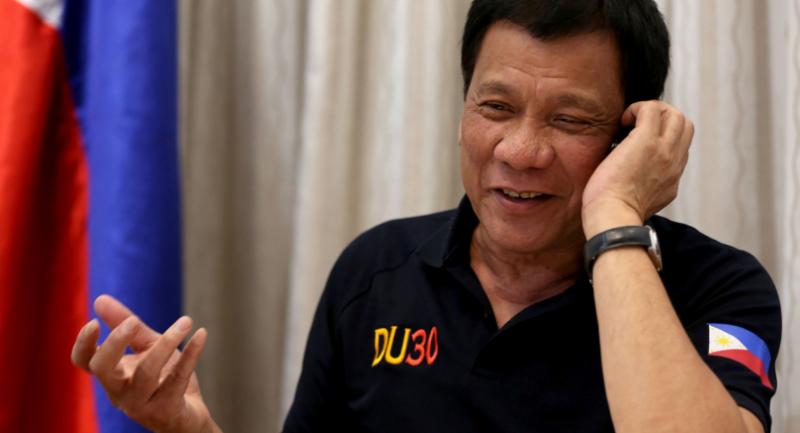 This handout photo taken by the Presidential Photographers' Division on December 2, 2016 and released December 3, 2016 shows Philippines' President Rodrigo Duterte gesturing as he talks to US President-elect Donald Trump on the phone. / AFP PHOTO

President Duterte claimed on Wednesday that the extremist ISIS would creep into Southeast Asia to establish a four-nation caliphate in the region.

The President said the violent Islamic armed group might retreat to Southeast Asia if they were flushed out of Iraq and Syria, a distance of more than 8,000 kilometers.

“This is our problem now. The ISIS, these extremists, are fighting it out in Aleppo and Mosul… Once they run out of land base, they would retreat to the sea and escape,” the Chief Executive told a gathering of urban poor residents in Mandaluyong City.

“And they have this dream of a caliphate kingdom that would be comprised of Indonesia, Philippines, Malaysia and Brunei,” he added.

Duterte did not offer evidence for his claims and he is known to have made outrageous statements in the past but he raised the ISIS threat on the day the Jakarta Post reported the warning of the Indonesian Military (TNI) that the Islamic State (IS) group has been working to create a fully pledged wilayat or province in the southern Philippines that would pose a serious security threat to Indonesia.

The report quoted TNI commander General Gatot Nurmantyo as saying last Tuesday that the IS has been falling back in Iraq and Syria against internationally backed anti-IS forces, and has started building its base in Mindanao, which borders with Kalimantan and Sulawesi.

The President reiterated the importance of having a federal government in securing peace in Mindanao.

“Believe me. It’s up to you. I leave it to the people to decide. If the federal system would not be approved, you might as well give up Mindanao. We will not have peace,” he said.

“So if others are resistant to the idea of a federal setup, without that federalism, the Moro people will never agree to anything else,” he added.

The President also urged the public to be prepared for possible terror attacks in the country.

“The next adventure that I will embark on is terrorism. Be prepared for that. That’s what I fear most, including this problem on illegal drugs,” he said.