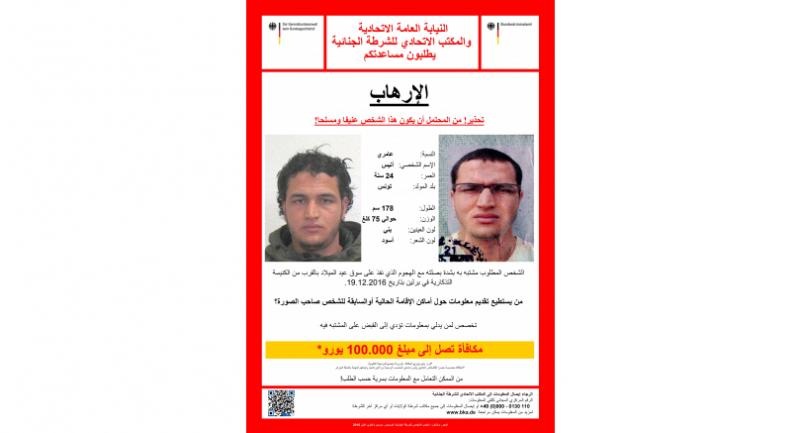 This handout picture released by the German Federal Police Office (BKA) on December 22, 2016 shows an arrest warrant in Arabic for a Tunisian man identified as Anis Amri, suspected of being involved in the Berlin Christmas market attack. / AFP PHOTO

ROME - The Tunisian man suspected of carrying out the Berlin truck attack was shot dead by police in Milan on Friday, Italy confirmed.

Anis Amri, 24, was accused of killing 12 people and wounding dozens more in Monday's assault on a Christmas market, which has been claimed by the Islamic State jihadist group.

Italy's interior minister Marco Minniti told a press conference in Rome that Amri had been fatally shot after firing at police who had stopped his car for a routine identity check around 3:00 am (0200 GMT).

Identity checks had established "without a shadow of doubt" that the dead man was Amri, the minister said.

Amri had been missing since escaping after Monday's attack in central Berlin. He had links to Italy, having arrived in the country from his native Tunisia in 2011.

Shortly after his arrival in Italy he was sentenced to a four-year prison term for starting a fire in a refugee centre. He was released in 2015 and made his way to Germany.

German police said Amri steered the 40-tonne truck in the attack after finding his identity papers and fingerprints inside the cab, next to the body of its registered Polish driver who was killed with a gunshot to the head.

In Tunisia, a brother of the fugitive had appealed to him to surrender and said: "If my brother is behind the attack, I say to him 'You dishonour us'."

German Chancellor Angela Merkel said Thursday she was "proud of how calmly most people reacted" to the country's deadliest attack in years.

But her assuring message failed to dampen criticism of what many politicians and newspapers slammed as glaring security failures leading up to Monday's attack.

Berlin public broadcaster RBB reported that police filmed Amri heading into a Berlin mosque on Tuesday -- after the attack -- at a time when the investigation was still focussed on a Pakistani suspect who was later released.

Officials earlier revealed that Amri was a rejected asylum seeker with a history of crime, had spent years in an Italian jail and had long been known to German counter-terrorism agencies.

News weekly Der Spiegel reported that in wiretaps, Amri could be heard offering to carry out a suicide operation, but that his words were too vague for an arrest warrant.

Amri had been monitored since March, suspected of planning break-ins to raise cash for automatic weapons to carry out an attack -- but the surveillance was stopped in September because Amri was mostly active as a small-time drug dealer.

Conservative lawmaker Stephan Mayer, a critic of Merkel's liberal stance on refugees, said the case "held up a magnifying glass" to the failings of her migration policy that brought almost 900,000 asylum seekers to Europe's top economy last year.

"It's clear that a lot went wrong... it was a systemic failure," said Peter Neumann, professor of security studies at King's College London.

Neumann argued that German security services lacked the manpower to maintain around-the-clock surveillance of the 550 known radical Islamists in Germany.

"Germany's anti-terrorism structure is failing to match the scale of the problem," he told news channel NTV. "Once the dust settles, it will be important to have a fundamental rethink."

While the security debate rages, and is set to intensify in the election year 2017, many Germans were looking ahead to Christmas Eve on Saturday, the country's most important festival.

On Thursday, Berliners flocked to the reopened Breitscheid square Christmas market that was targeted in Monday's carnage.

The government has appealed for people to carry on as normal and not to give in to fear.

Organisers dimmed festive lights and turned down the Christmas jingles as a mark of respect for those killed.

Victims were also honoured with candles, flowers, letters of condolence and signs reading "Love Not Hate".

Among the dead were six Germans, 60-year-old Israeli Dalia Elyakim, and a young Italian woman called Fabrizia Di Lorenzo. Forty-eight others were injured.

On Friday, a memorial concert was planned at the iconic Brandenburg gate under the theme of "Together Berlin".

Germany had until now been spared the jihadist carnage that has struck neighbouring France and Belgium.

But it has suffered a spate of smaller attacks, including two in July that left 20 people injured, both committed by asylum seekers and claimed by the Islamic State group.

Merkel said Germany had "known for a long time that we are in the crosshairs of Islamic terrorism. And yet, when it happens... it is a totally different situation."