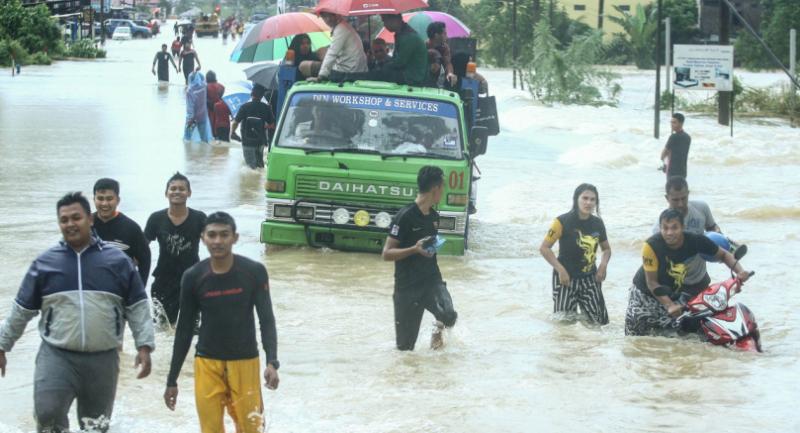 People wade through a flooded street in Malaysia's northeastern town of Rantau Panjang, which borders Thailand, on January 3, 2017. / AFP PHOTO

The latest round has forced authorities to evacuate 10,038 residents from Kelantan and 12,910 people from neighbouring Terengganu, officials said.

Heavy rain in the past five days has also caused 101 schools to be closed. Many roads are impassable and train services to some destinations in Kelantan have been suspended.

But no deaths have so far been reported in the two states.

They are being housed in 139 relief centres that provide food, drinks and medical aid, he said.

"It is still raining heavily. Some 30 village roads are closed and water levels at some places are about one metre deep and we are using boats to evacuate villagers," he said.

In Kelantan, which suffered massive floods and major destruction of homes and infrastructure in December 2014, 10,038 people have been displaced by flooding.

The figure rose from 4,906 Tuesday, said Zainuddin Hussin, the chief of the state's civil department force.

Zainuddin said 74 relief centres are operating in Kelantan but rainfall was scattered and many rivers were no longer overflowing their banks.

Malaysia's worst flooding in decades in 2014 forced some 118,000 people to flee. Prime Minister Najib Razak came under fire after photos showed him golfing with US President Barack Obama during the emergency.

With a snap general election expected this year, Najib will visit Terengganu and Kelantan on Saturday to oversee the evacuations, his aide said.

Votes from the two states will be crucial for the ruling United Malays National Organisation.