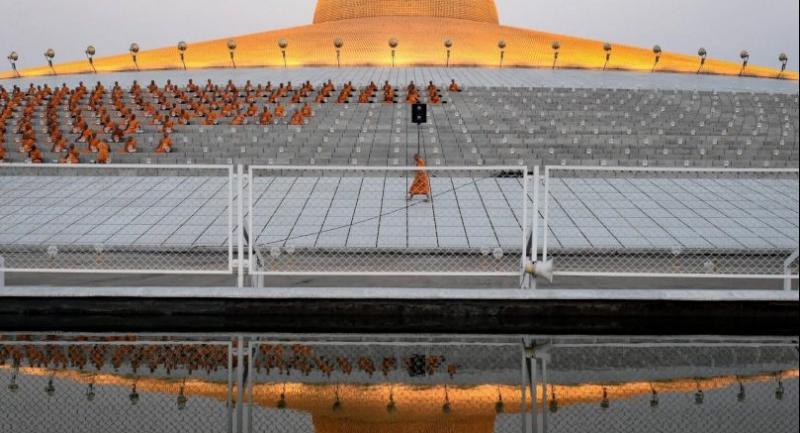 Thai cops have uncovered secret tunnels running underneath a space-age temple of the controversial Dhammakaya Buddhist sect, as their manhunt for an elusive elderly monk accused of massive embezzlement entered a second day.

Thousands of officers are involved in the search for the 72-year-old monk Phra Dhammachayo, who is believed to be holed up in the vast Wat Dhammakaya temple grounds on the outskirts of Bangkok.

The former abbot, who founded the breakaway Buddhist order in 1970 and has marshalled its prodigious rise, is accused of money laundering and accepting embezzled funds worth $33 million from the jailed owner of a cooperative bank.

But in an increasingly bizarre cat-and-mouse game, cops were frustrated for a second day running as they were led by orange-robed monks through endless rooms and hallways in the 1,000-acre site.

On Thursday police found a 1.5 kilometre tunnel -- spilt into two routes -- dug under the UFO-like temple that dominates the site, which may have been used by the ex-abbot as a place to hide.

"It only has one entrance but it does not go outside of the temple," Police Colonel Worranan Srilum, deputy spokesman for the DSI -- Thailand's equivalent of the FBI -- told reporters.

They also searched a sick bay used by the former abbot, but instead of finding their quarry, pulled back an orange robe covering several pillows arranged to look like a sleeping person.

"The Dhammakaya temple area is sprawling so it will have to take time to search... we can't find him yet, but our intelligence insists that he is still inside (the) temple," he added.

The sweep of the powerful and ultra-rich Wat Dhammakaya temple comes after Thailand's junta chief invoked special powers to put its sprawling compound under military control.

Temple officials say the ex-abbot is innocent and deny knowledge of his whereabouts.

Thailand's secular authorities are normally reluctant to intervene in the affairs of the clergy in the Buddhist-majority country.

But the Dhammakaya sect has long been in the firing line. Critics accuse the temple of promoting a pay-your-way to nirvana philosophy, burnished with "cultish" mass shows of devotion and a sophisticated PR machine.

The temple is also mired in the kingdom's treacherous politics, with rumoured links to ex-premier Thaksin Shinawatra, who was ousted in a 2006 coup and still hated by the Bangkok elite and their military allies.