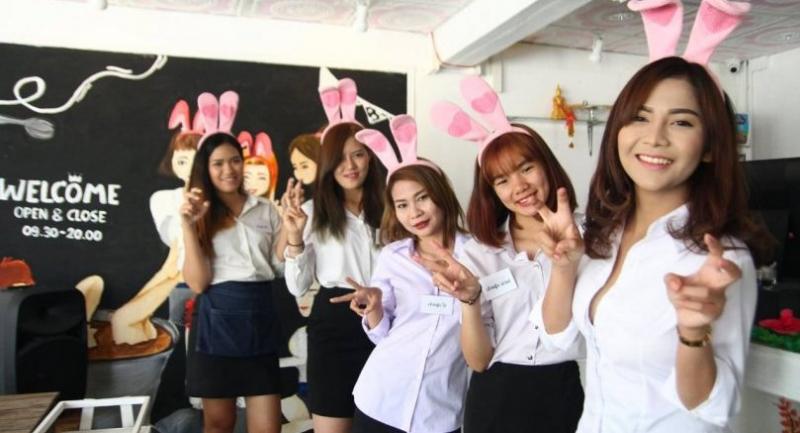 A newly opened coffee shop featuring waitresses in “bunny girl uniform” has become a hot topic among online social networkers, especially those in the North.

But the bunny girl uniform does not resemble that of Play Boy girls. Instead, the waitresses simply wear tight a long-sleeved white shirt with a short black skirt and pink bunny ears over their head.

Many patrons have posted selfie shots with the bunny waitresses on their Facebook walls, which has brought more curious customers to the shop.

The shop is located on a soi beside Nong Hoi Market off Jai Kaew Road in Tambon Nong Hoi in Chiang Mai’s Muang district.

The shop owner, Kanchana Boonprasert, 30, said the shop is open from 9.30am to 8pm. She said the shop serves coffee and other drinks.

She decided to have the shop feature waitresses in cosplay costumes because she believes it is unprecedented.

She denied the shop also sell drinks to the waitresses as in cocktail lounges.

She said her waitresses are university students who do it as a part-time job. At the moment, there are 10 of them at a time and each girl must have her own strategy to entice patrons to return to the shop, Kanchana added.