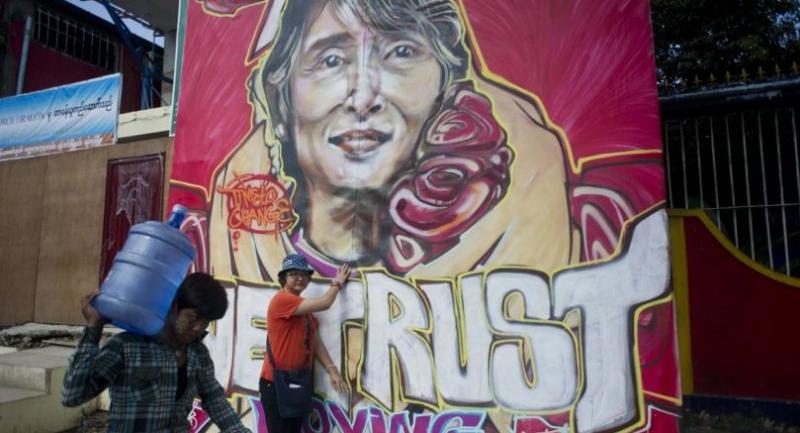 This file photo taken on November 13, 2015 shows a woman posing next to a graffiti depiction of Myanmar's opposition leader Aung San Suu Kyi outside the headquarters of the National League for Democracy party (NLD) in Yangon/AFP

YANGON - Aung San Suu Kyi's government will face its first test at the ballot box on Saturday in by-elections around Myanmar seen as a barometer for growing disillusionment with her party a year after it took office.

The euphoria that surrounded the democracy icon's landslide electoral win in 2015 has ebbed as her party struggles to push through promised reforms.

Discontent is particularly acute in ethnic minority areas where many see Suu Kyi as working too closely with the military that ran the country for 50 years and still controls key levers of government.

With only 19 seats up for election, the poll is unlikely to alter the balance of power in a government firmly dominated by Suu Kyi's National League for Democracy.

But the voting may offer a glimpse into the public's view on the party's first year in power.

Hundreds of voters lined up outside polling stations on the outskirts of Myanmar's commercial capital Yangon early Saturday, though the scene lacked the fanfare and enthusiasm that marked the historic 2015 polls.

Chit Min, a resident in Dagon Seikkan suburb, told AFP many of his friends decided not to vote this time around.

"But I am sure the NLD will win again," he added.

The party will face its toughest challenge to the north in Shan State, where tens of thousands have been displaced by a surge in fighting between the army and ethnic insurgents.

"There are many victims of war here and other ethnic areas now," Sai One Leng Kham, an upper house MP from the Shan Nationalities League for Democracy, told AFP.

The NLD "needs to understand the real situation. Sometimes they are working without any understanding of what's going on on the ground," he added.

In strife-torn Rakhine State on Myanmar's western coastline, the party will face a strong challenge not only from the local ethnic minority Arakan National Party but also the military-backed USDP.

The USDP led the transitional government that took over from the junta in 2011, but was trounced in elections four years later that swept the NLD to power.

To the south in Mon, the NLD is facing a backlash over the naming of a new bridge after Suu Kyi's father that many see as a symbol of the party's disregard for minorities.

Myanmar's economic and political elite, including the NLD, have long been dominated by the majority Bamar ethnicity.

"Now more people think MPs from ethnic parties should be in parliament," said local Nyan Soe, who was among tens of thousands who protested over the bridge.

Saw Tun, an NLD MP from Mon state, said he is nonetheless confident of victory after receiving strong support on the campaign trail.