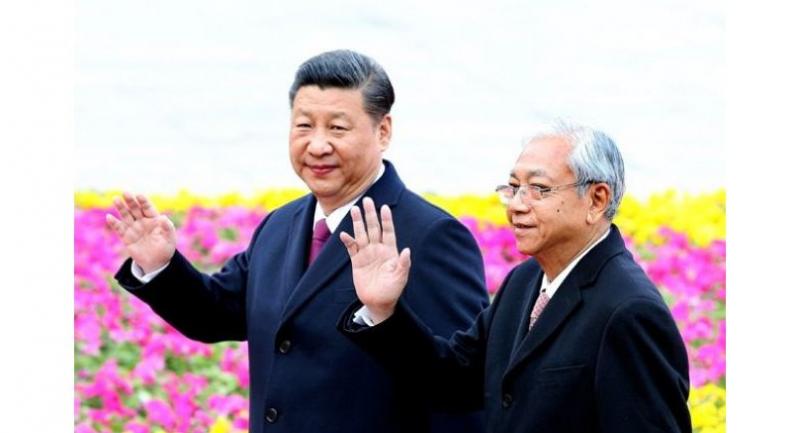 President Xi Jinping and Myanmar President U Htin Kyaw attend a welcoming ceremony outside the Great Hall of the People in Beijing on Monday. [Photo by Feng Yongbin/China Daily]

China and Myanmar on Monday signed an agreement on a crude oil pipeline to send oil from Myanmar's Kyaukpyu Port to Yunnan.

The agreement and eight other cooperation documents were signed after talks between President Xi Jinping and Myanmar President U Htin Kyaw, who is on a state visit to China from Thursday to Tuesday. Details of the agreements were not released.

In the talks, Xi said China is willing to "push forward China-Myanmar cooperation to focus more on Myanmar's livelihood, such as education and rural area development", according to a news release issued by the Foreign Ministry.

Xi said China expects to work with Myanmar to firmly adhere to the right direction of bilateral ties and support each other on key issues related to core interests.

He said China respects Myanmar following a development path in accord with its own national status.

China will continue playing a constructive role in Myanmar's domestic peace process and work with Myanmar to jointly maintain security and stability in the border area, Xi said.

U Htin Kyaw said his country will never forget China's help in its development and support in the international arena.

This is his first visit to China after taking office in March 2016. He visited Chengdu, Xi'an, Shanghai and Hangzhou before arriving in Beijing.

Vice-Foreign Minister Liu Zhenmin told reporters after the meeting that one section of the China-Myanmar crude oil pipeline has been finished, while China has built a refinery near Kunming, provincial capital of Yunnan.

"Recently, the two sides have been discussing operation of the pipeline. After the signing of the agreement, I believe the pipeline will be put into operation soon," Liu said.

He said the project will not only transport oil that China imports from Myanmar, but will also benefit regions along the pipeline.

China and Myanmar have "basically reached consensus" on the Myitsone Dam project, which was delayed by the former Myanmar government, Liu said.

"Both sides expressed positive expectations," he said, adding the two sides will continue the discussion to reach a proper win-win settlement. "It is predictable that there will be a result acceptable to both sides in the coming future."

Liu said a gap in the nation's common efforts that existed in the past will be filled by the decision to focus combined efforts more on the livelihoods of Myanmar's people.

U Htin Kyaw also met Premier Li Keqiang on Monday. Li stressed that stability in northern Myanmar has a direct effect on security of Southwest China.

China does not want to see the border area disturbed and will support Myanmar's efforts to realize domestic peace and reconciliation, Li said.