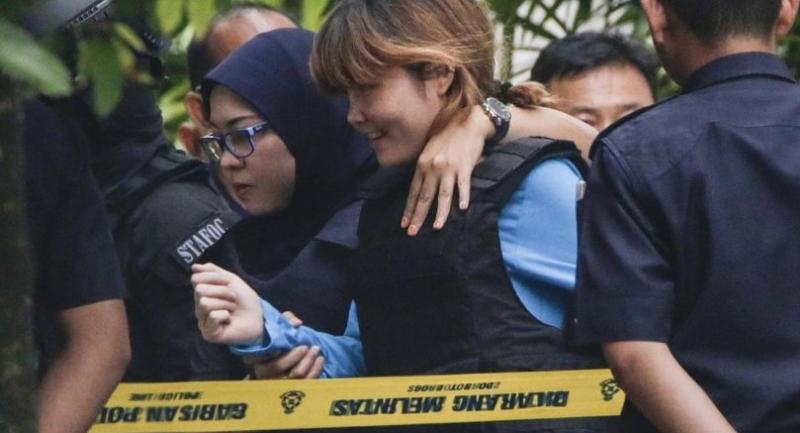 Vietnamese Doan Thi Huong, 28, (C) who was detained in connection with the death of Kim Jong-Nam, is escorted by Malaysian police for a court appearance at magistrates' court in Sepang, Malaysia on April 13.//EPA

Kuala Lumpur - Two women accused of assassinating the half-brother of North Korea's leader appeared in a Malaysian court on Thursday ahead of a murder trial that could see them hanged.

Indonesian Siti Aisyah, 25, and Doan Thi Huong, 28, from Vietnam, were taken in bulletproof vests to a heavily guarded magistrate's court close to the airport where Kim Jong-Nam was fatally poisoned two months ago.

Police accuse the pair of having wiped the banned nerve agent VX on Kim's face at Kuala Lumpur International Airport on February 13 as he was about to board a flight to Macau, where he was living in exile.

Rival South Korea accuses the North of masterminding the killing of Kim, the estranged half-brother of North Korean leader Kim Jong-Un. Pyongyang denies the accusation, insisting he died of a heart attack.

In a brief hearing, the women were ordered to appear before the court on May 30 as state prosecutors sought more time to prepare their case. The pair did not enter a plea.

Doan's lawyer asked the court to alter the murder charge since prosecutors have not identified four people mentioned in charge documents as accomplices to the women, but the judge did not entertain the request.

About 100 police officers, include commandos in balaclavas and carrying assault rifles, guarded the court compound during the women's appearance.

Dressed in a red top and blue jeans, Siti kept her head down throughout the hearing. Doang, also casually dressed, quietly observed the court proceedings.

The case is due to be transferred to an upper court where the women will be tried for murder. If convicted, they could face the death penalty, which is carried out by hanging in Malaysia.

The killing sparked a diplomatic crisis between Malaysia and North Korea which saw both countries banning each other's citizens from leaving and withdrawing their ambassadors.

The travel ban was lifted in late March after a deal was struck involving the return of Kim's body to North Korea.

Police are still looking for four North Korean men who are suspected to have taken part in the murder plot, but are believed to have returned to Pyongyang.

Three other North Koreans earlier described as "persons of interest", including a diplomat based in Malaysia, have been allowed to return home under the deal.

Indonesian officials have maintained that Siti was duped into believing she was taking part in pranks for a TV show, while Doan's family said she was invited to Malaysia to be an actress.

Tran Huy Hoang, a young Vietnamese man who attended the hearing and described himself as a cousin of Doan, told AFP: "She loves to travel and party but she never do anything violent.

"All of us believe she was cheated."//AFP