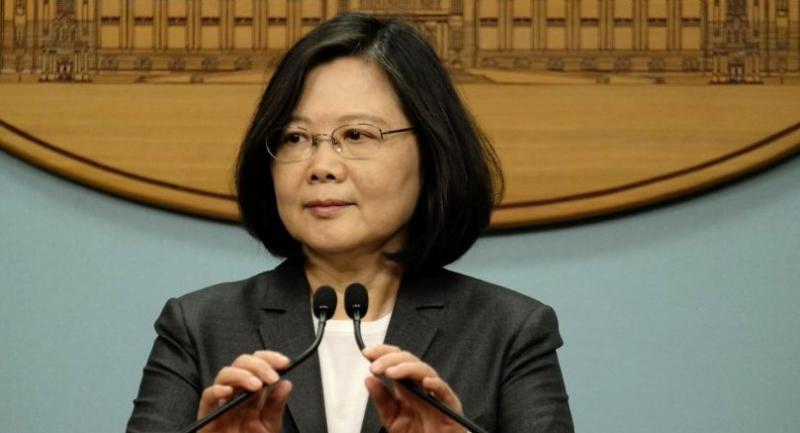 Taiwan President Tsai Ing-wen speaks to the press at the Presidential Office in Taipei on April 19, 2017. / AFP PHOTO

The rallies were staged as parliament began reviewing controversial bills which are designed to stop the struggling pension system from collapsing but are expected to hit nearly 500,000 civil servants and teachers.

Several lawmakers and politicians said they were pushed, punched and had water splashed on them as they tried to enter the legislative complex in central Taipei, which was guarded by barbed-wire barricades and a heavy police presence.

President Tsai Ing-wen vowed to press ahead with the changes despite a recent string of protests and said her government would not tolerate violence.

"Intentionally causing conflicts will not deter the (government's) determination for reforms... our urgent task is to bring the pension system back from the brink of bankrupcy," she told reporters.

Anger has been mounting among public-sector workers and retirees as the government unveiled draft bills aimed at reducing their pensions and phasing out a special savings rate for them which pays 18 percent interest.

The government has warned that various pension funds are likely to go bankrupt within three to 14 years unless the system is overhauled.

There was also chaos inside parliament Wednesday as opposition lawmakers temporarily seized the podium and demanded the government hold public hearings on the issue.

The pension issue is the latest challenge to Tsai, who has seen her popularity ratings fall rapidly since taking the helm in May last year as her government tackles a range of domestic issues -- from gay marriage to judicial reform.

The Pension Reform Oversight Alliance, an organiser of Wednesday's protests, criticised the government's "rough and irresponsible" methods and vowed to stage bigger demonstrations.

"The Tsai government blames us but it is their incompetence that is forcing many people, not just civil servants and teachers, to take to the streets," said Lee Lai-hsi, a spokesman for the alliance.

Last December parliament plunged into chaos with opposing lawmakers brawling in the chamber while labour activists set off smoke bombs outside in protest at proposed holiday cuts.

Taiwan's parliament, once notorious for its mass brawls, had been relatively peaceful under the previous government, except for fights over a contentious China trade pact and a new nuclear plant.

The government also aims to improve the pension system for around 10 million non-public sector workers in its reform bills.