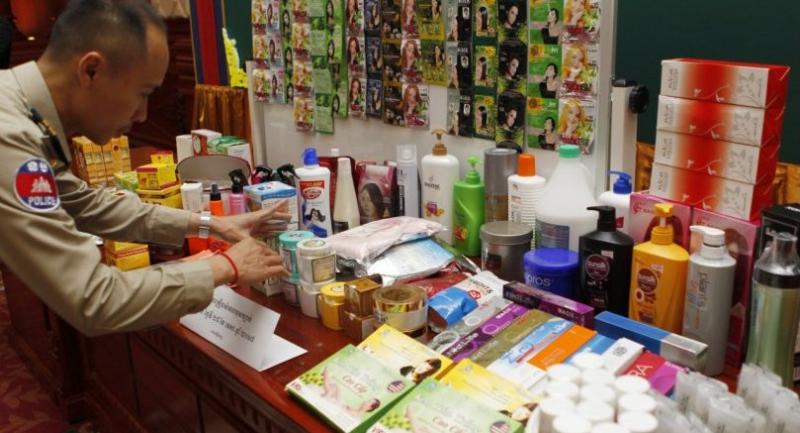 A Cambodian official prepares fake goods for display during a press conference in Phnom Penh, Cambodia, 08 May 2017. The Cambodian authorities seized over 68 tons of fake goods from illegal smugglers in Kandal province. // EPA PHOTO

PHNOM PENH - Cambodian authorities have confiscated 68 tonnes of fake cosmetic products that purported to be made in countries like Japan and South Korea, an official said, calling it the country's largest bust of counterfeit make-up.

The goods were produced locally but labelled as products made in countries like Japan, South Korea, China, the US, Germany and Thailand, said Meach Sophana.

Some of the cosmetics had fake branding from the luxury Japanese skin care firm Shiseido, he added.

"This is a huge quantity in the history of counterfeit crackdowns in our country," the official told reporters.

He said three people, including two Chinese nationals, were detained in the raids on warehouses in the capital Phnom Penh and Kandal province in March and April following a months-long investigation.

"We often see news on Facebook or in newspapers that some (women) who used skin-whitening lotion suffered side effects and died, or had their skin damaged," he said.

Skin whitening creams are popular in Cambodia, where many believe a lighter complexion reflects a higher status.

That image is fuelled by the popularity of light-skinned models and actors on billboards and television.