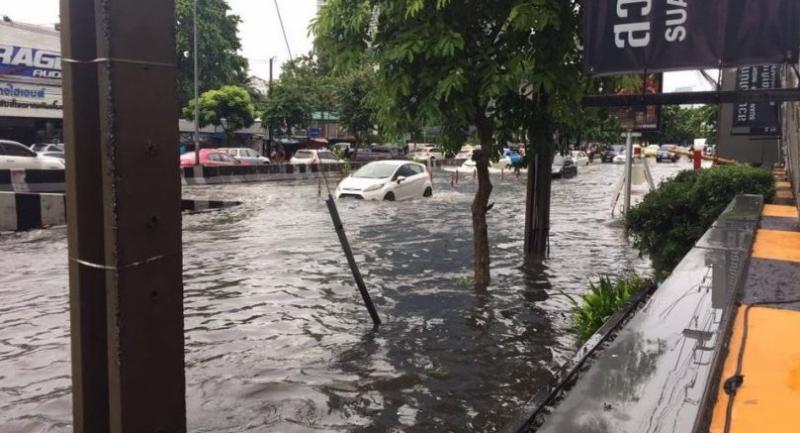 Ratchadapisek Road near Criminal Court at 7.46am By@virus_aey

Heavy rains throughout Wednesday night and Thursday morning have caused flooding on many Bangkok roads, leading to severe traffic congestion during the morning rush hours.

1. Ratchadaphisek Road from the Ratchayothin intersection to Lat Phrao Road

4. Pattanakarn Road from the Klong Tan intersection to Klong Lao

5. Ramkhamhaeng Road in front of the Bang Kapi electricity office

On some roads waterlogging was as high as 40 centimetres.

The floods prompted Sompong Wiengkaew, director of the Bangkok Metropolitan Administration’s Sewerage and Drainage Department, to inspect some roads at 4.40am.

He said many roads were flooded late Wednesday night but the waters had receded by Thursday morning while his department officials were racing against time to drain the water.

The water level subsided on the Ngam Wong Wan-Pong Phet Road and vehicles could use two right lanes while the left lanes on both sides were still flooded.

He said the road in front of the Criminal Court was still inundated.

His department reported at 4.45am that Klong Chao Khun Sing in Wang Thong Lang district had the heaviest rainfall – 156.5 millimetres.