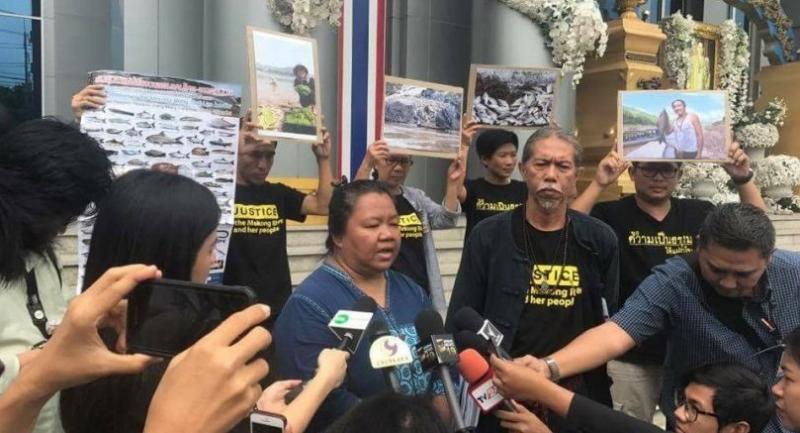 Citizens of eight Thai provinces along the Mekong River are suing state agencies because they believe there was inadequate public participation in planning for the Pak Beng hydropower dam to be built by Laos.

The Thai Network of Eight Mekong Provinces on Thursday filed suit in Administrative Court against the Water Resources Department and its director-general and the Thai National Mekong Committee.

They charge that the Pak Beng Dam planned for construction in in Laos’ northern Laos Oudomxay province could have severe negative impacts on people in Thailand due to its location 92 kilometres downstream from Chiang Rai’s Wiang Kaen district.

Jirasak Inthayot, a representative of the network from Chiang Rai, said concern centres on the poor quality in this case of the legally required public participation in the planning process.

The network decided to sue the Thai agencies involved to force them “properly” perform their duty and safeguard citizens against the dam’s potential negative impacts, he said.

“We are disappointed with the public notification process in Thailand that has just been concluded,” Jirasak said. “The people were not well informed about the project and some important information was missing from the report, such as impacts on fisheries and biodiversity.

“We would like to ask the Thai authorities to disclose this information and protect citizens from the transboundary impacts of the dam.”

Jirasak said people in Chiang Rai were worried about the “unclear” plans for the dam and the possibility that flooding caused by river current backed up from the dam reservoir would force many households to relocate and inundate fertile farmland on the riverbank.

China’s Datang Corp is to build the Pak Beng Dam, 90 per cent of the power from which will be sold to Thailand. The Prior Notification, Prior Consultation and Agreement process is scheduled to finish on June 19.