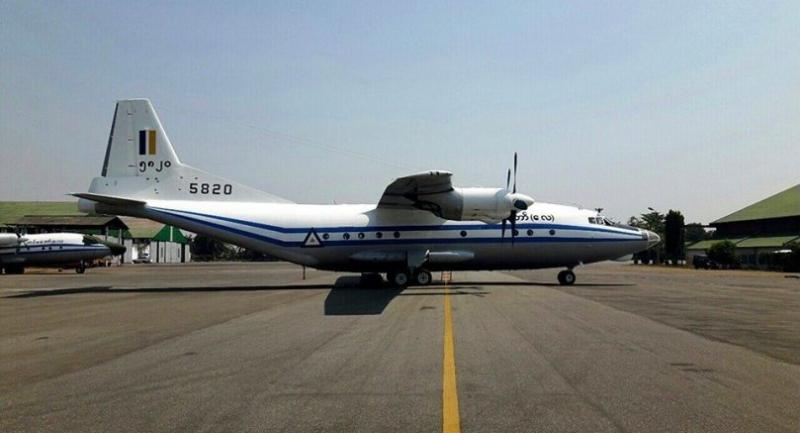 An undated handout file photo shows Shaanxi Y-8, a medium size medium range transport aircraft, which crushed into Andaman Sea on 07 June 2017 parked on the tarmac at an Air Force Base in Myanmar. EPA

YANGON- A Myanmar ship has retrieved the black box of a plane that crashed into the Andaman Sea with 122 people on board, the army said Sunday, raising hopes of discovering the cause of the tragedy.

The military aircraft plunged into the sea during a routine flight from the southern city of Myeik to Yangon on June 7.

Most of its passengers were the wives and children of servicemen.

Navy vessels and fishing trawlers have so far recovered 92 bodies plus some pieces of plane debris from off the coast of the southern town of Dawei.

Last week a fishing boat snagged a piece of the Shaanxi Y8's tail.

On Sunday Myanmar's army chief said the black box, which consists of a digital flight data recorder and a cockpit voice recorder, had been brought aboard a military vessel.

"The part of the tail of the Y-8 plane, which included the Flight Data Recorder and the Cockpit Voice Recorder, was successfully put on a ship in the afternoon," the office of the army chief said in a Facebook post, alongside photos of the bright orange recording units.

"After finding that part of the plane, we are now in the process of finding out why the plane crash happened," the statement added.

It did not say how long it might take to decipher the black box data, a process that can take days or even weeks.

There has been no official explanation for the cause of the crash.

The Chinese-made aircraft was less than two years old and had only flown some 800 hours, according to the military.