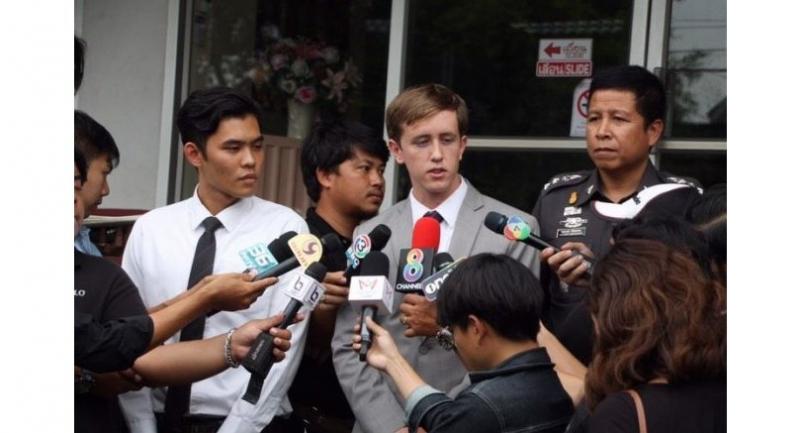 YouTube prankster and celebrity seeker Nate Bartling, also known on Facebook as “My Mate Nate”, has been fined Bt5,000 for placing coins on a railway track in Prawes district and allowing a train to run over them.

He recorded the incident for a video clip in which he said he was trying to determine which coins were the strongest.

State Railway of Thailand (SRT) officials filed charges with Prawes police against Bartling, 24, and his friend, Nut Weerotai, 23, who also appeared in the clip. The SRT alleged that the pair had trespassed on its property.

They were found guilty of several charges concerning acts shown in the video clip, Alongkorn said, adding that the Bt5,000 levied on both Bartling and his friend was for a breach of a law prohibiting anyone from placing things on a public byway that could create obstacles to safety and traffic.

“The fine of Bt5,000 is the maximum, so that young people will not try to copy or repeat it,” Alongkorn said.

Alongkorn said he also informed Bartling that he faced a charge of animal cruelty arising from another of his video clips that showed a cat fighting with a scorpion.

Bartling is alleged to have organised and recorded the fight, then posted the video clip on his Facebook page. Many cat lovers sought police action against him, alleging animal cruelty. More than 120,000 people have also signed a petition to have him arrested.

Alongkorn quoted Bartling as saying that he did not organise the fight. “He said that when he returned home, he saw the cat fighting with the scorpion. He said he may have been wrong to video the fight but after that, he took the cat to see a vet who found that it was not injured.”

The punishment for animal cruelty is a jail term of two years, a fine of not more than Bt40,000 or both.

A representative of a cat lovers’ group met police at the station and insisted that they further investigate the matter, as the group was concerned that others would imitate Bartling’s actions.

Police have about 20 days to collect information about the alleged animal cruelty. Bartling was freed temporarily as he came to see police of his own accord, officers said.