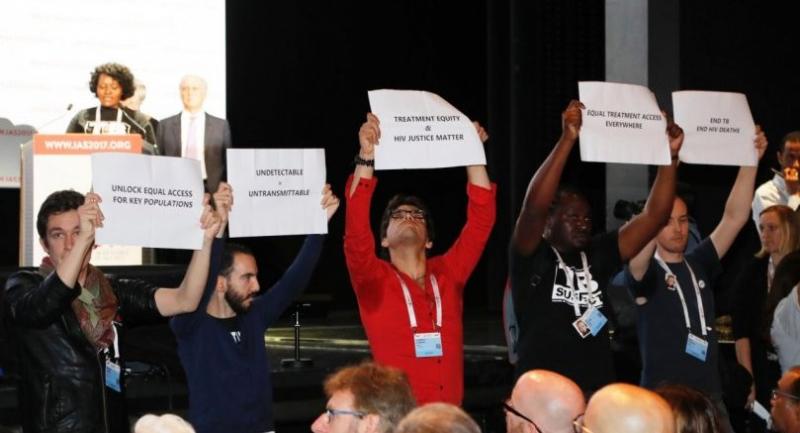 People hold placards during the opening of the 9th International AIDS Society conference on HIV Science on July 23, 2017, in Paris. /AFP

PARIS - Leaders in the fight against HIV on Sunday urged the US government, the largest donor to global AIDS research and treatment, to reject "draconian" funding cuts proposed by President Donald Trump.

Any funding lapse, they said, will be counted in human lives.

"As we gather today, the largest and most important donor in HIV response has threatened devastating cuts to funding for research and treatment programmes," International AIDS Society president Linda-Gail Bekker told a global HIV science conference in Paris.

"Draconian cuts to research and... HIV funding is a catastrophe we cannot afford to see happen," she said.

More than 6,000 scientists are gathered in the French capital until Wednesday to assess advances in AIDS science amid concerns over money drying up.

Globally, government donor funding for HIV dropped last year to the lowest level since 2010 -- from $7.5 billion (6.4 billion euros) in 2015 to $7 billion, according to the Kaiser Family Foundation (KFF), a California-based health policy NGO.

The United States has for years been the biggest contributor by far to the global fight against HIV infection, accounting for about two-thirds of funding by governments.

However Trump's proposed budget, submitted in May, reduces funding for "several global health programmes, including HIV/AIDS, with the expectation that other donors can and should increase their commitments."

"These onslaughts on funding, principles and programmes have already begun to erode the gains we have so painstakingly made," she told conference delegates.

"If we do not actively move forward on the HIV response, then we are sliding back. Sliding back means sick patients, lost lives, ongoing transmission and infected children -- a world that we do not want to go back to."

UNAIDS executive director Michel Sidibe pointed to gains in life expectancy for people infected with HIV as a "return on investment".

From only four percent of infected people on life-saving anti-retroviral treatment in 2003, the number grew to more than 50 percent in 2016 -- covering 19.5 million of the 36.7 million people living with HIV around the world.

"I know that donors... want to see impact. And today we can say... that we have been able to reduce by more than 50 percent the death rate, mortality rate, among people living with HIV," said Sidibe.

But much work remains -- some 17 million people are still not getting the treatment they need, including 1.2 million children.

And in east Europe and central Asia, there has been a 60-percent rise in new infections in the last six years, mainly in Russia.

"The worst conspiracy would be complacency," said Sidibe, pointing to a $7 billion gap in annual funding for AIDS research and prevention and treatment programmes.

"Any cuts to funding will jeopardise our results."

AIDS expert Jean-Francois Delfraissy, co-chairman of the conference, said there are likely to be similar funding trends "in Europe, and probably also in France in the next years".

"We have a lot of great success and I think that politicians can understand that, but I think it's not sufficient," he said.

Trump was not the only world leader to come under fire.

Activists questioned why French President Emmanuel Macron did not attend the first day of the conference, though it was unclear whether he had been invited.

Protesters waved placards reading: "Shame on Macron" at Sunday's opening session. The presidency has since announced Macron will receive conference organisers, including Bekker, on Monday.