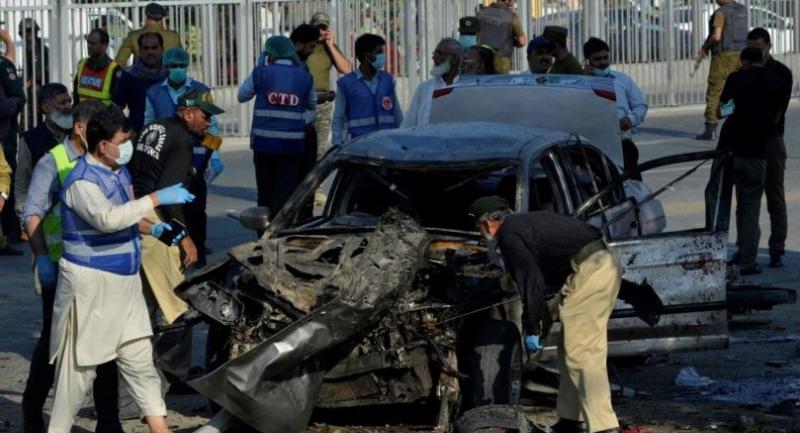 Pakistani security officials inspect a destroyed vehicle after an explosion in Lahore on July 24, 2017. An explosion killed at least 15 people and injured 20 in Pakistan's eastern city of Lahore July 24. // AFP PHOTO

LAHORE, Pakistan - An explosion killed at least 20 people and injured dozens in a busy vegetable market in the Pakistani city of Lahore Monday, officials said, but the cause of the blast was not immediately clear.

"(The explosion) seems like a suicide blast targeting police, but we are still ascertaining the nature of the explosion," the city's commissioner Abdullah Khan Sumbul said.

He told AFP at least 20 people had been killed and 35 wounded.

Meanwhile a spokesman for the Lahore police, Syed Hammad Shah, put the toll at 25 dead with 40 injured.

Interior Minister Chaudhry Nisar Ali Khan warned the toll could rise in a press conference held minutes after the attack.

Most of the casualties were police officers and some bystanders, he said.

"It is not yet confirmed if it is an incident of terrorism or an accidental explosion," the interior minister added.

Provincial law minister Rana Sanaullah also said the nature of the blast was not confirmed, but said it had appeared to target a vegetable market crowded with shoppers.

Lahore has been hit by significant militant attacks in Pakistan's more than decade-long war on extremism, but they have been less frequent in recent years.

The last major blast in the city was in March last year, when 75 were killed and hundreds injured in a bomb targeting Christians celebrating Easter Sunday in a park.

A bomb also killed 14 people in Lahore in February during a wave of attacks across the country, denting optimism that Pakistan's security situation was improving.

In April, seven were killed in an attack in the city targeting a team that was carrying out the country's long overdue census.

Pakistan's security has dramatically improved since the powerful army cracked down on militancy in the wake of the country's deadliest ever attack in 2014.

That assault saw gunmen from the Pakistani Taliban storm a school in the northwestern city of Peshawar, killing more than 150 people, the majority of them children.

It shook a country already grimly accustomed to atrocities and prompted the military to step up an operation in the tribal areas, where militants had previously operated with impunity.

Explosions caused by gas cylinders -- which are used for cooking as well as in cars -- are also common in Pakistan. A blast in Lahore in February was initially thought to be a militant attack, but turned out to be a gas explosion.

The city of around six million people is Pakistan's cultural hub and the capital of its most powerful province, Punjab.