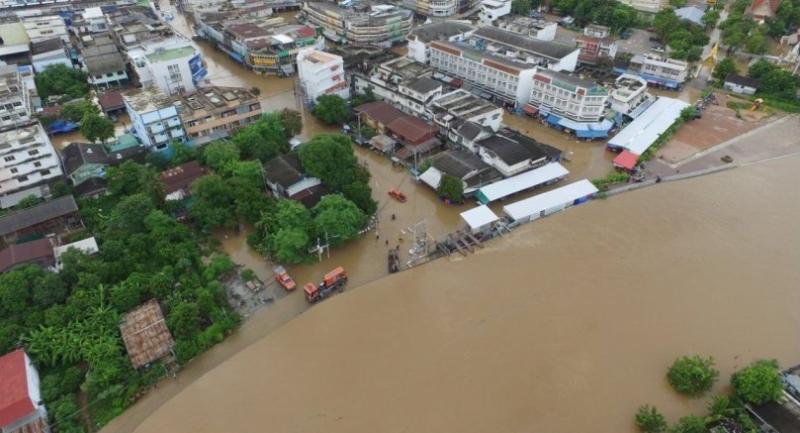 By Pichet Netbutr
The Nation

The flood barrier had leaked the night before resulting to slight flooding, but officials sealed the hole with large sandbags and continued to monitor the situation. At 5am on Friday, the river bust the flood barrier again, 30 metres from the previous night's leak.

This time the floodwaters flowed along the Ratchathani Road and vendors at the market's 50 shops had to close their businesses temporarily in the wake of 40cm-80cm-deep torrents.

As officials attempted to seal the new leak behind Wat Chai Chumpol in the afternoon, another 100-metre-long section of the barrier broke and floods covered the municipality's economic area, including Rat-uthit, Thassanapanich 2 and 3 roads. Wichien Jamnong and Khlong Taphetch communities were also submerged. Yom River in front of the provincial governor's residence, was at 7.37 metres and flowed at 549 cubic metres per second between 8am and 2pm.

Royal Irrigation Department deputy chief Thongplew Kongchan cited a report by the Smart Water Operation Center said the largest volume of water in the Yom River had passed Sukhothai's Sri Satchanalai district via Ban Hat Saphan Chan sluice gate at 697 cubic metre per second at 4am on Friday. He instructed officials to monitor the province's water situation closely so flood problems could be tackled.