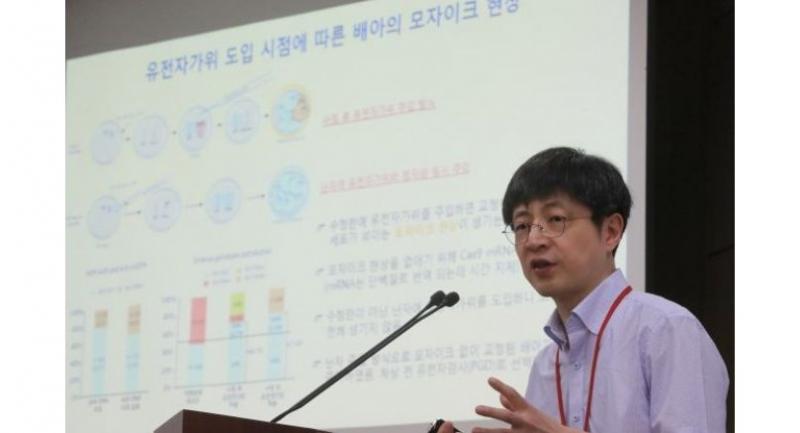 Kim Jin-soo, the head of the Center for Genome Engineering at the Institute for Basic Science in Korea, speaks during a press conference in Gwacheon, Gyeonggi Province, Thursday. (Yonhap)

SEOUL - Korean scientists discovered the way to repair a disease-causing mutation in human embryos by using the gene-editing technology, which can prevent babies from inheriting diseases that run in the family.

South Korean scientists from the Daejeon-based Institute for Basic Science have contributed to safely repairing a disease-causing mutation in human embryos via gene-editing technology, marking a major step toward a viable method to prevent inherited diseases.

They co-authored a study published Thursday in the scientific journal Nature, showing that a mutation linked with a deadly, hereditary heart disease can be corrected in early stage embryos using the CRISPR-Cas9 “gene editing” tool.

The finding is still laboratory-level at the moment, with much more research needed before the method could be applied to human pregnancies. Nonetheless, it suggests that scientists can repair DNA to prevent babies from inheriting diseases that run in a family.

At the same time, the breakthrough research has reignited long-running debate over the ethics of artificially modifying human reproductive cells, including whether it should be practiced at all.

The study was led by the US-based Oregon Health and Science University with scientists from Korea’s IBS and Seoul National University, the California-based Salk Institute for Biological Studies and China’s Shenzhen Engineering Laboratory for Innovative Molecular Diagnostics.

CRISPR-Cas9 is a gene-editing technique that lets scientists pinpoint, remove and replace a faulty sequence on a strand of DNA. The Cas9 protein works like a pair of molecular “scissors” that eliminates a mutated gene so that it can be replaced by a corrected version.

The international research team targeted a defective gene -- the MYBPC3 gene -- that causes hypertrophic cardiomyopathy, a deadly heart condition that affects about 1 in 500 people worldwide. It has no cure and can be caused by inheriting just one copy of the bad gene.

The team inserted sperm from a patient with hypertrophic cardiomyopathy, together with the CRISPR-Cas9 tool, into healthy donated eggs at the same time. As the embryo’s cells began to multiply, a high number of them appeared to correct themselves using the nonmutated genes.

The method successfully repaired the error in 42 out of 58 embryos treated, marking a 72.4 percent success rate. Without the treatment, only 50 percent of embryos formed by parents made up of one person who carries the defective gene would be expected to be free of that errant gene.

The timing of the CRISPR-Cas9 introduction -- injecting it simultaneously with the defective sperm into the healthy egg -- was also found to have raised the chances of success in gene repair.

Preliminary studies in China had introduced the gene-editing system after an egg had been fertilized by the sperm. Using this approach, embryos had often displayed mosaicism, in which only some of the cells in an embryo are corrected.

Introducing the editing component earlier in the fertilization process appears to have largely removed mosaicism, according to the study. Just one embryo showed mosaicism, it said.

“This study vastly improved the probability of preventing inherited diseases from passing on to the next generation using the CRSPR-Cas9 technique,” said Kim Jin-soo, the head of the Center for Genome Engineering at the Institute for Basic Science in Korea, who co-conducted the study.

“By using this technique, it’s possible to reduce the burden of this heritable disease on the family and eventually the human population,” said Shoukhrat Mitalipov, director of the Center for Embryonic Cell and Gene Therapy at Oregon Health and Science University and the senior author of the study.

Scientists from the Korea-based IBS led by Kim developed the CRISPR-Cas9 “scissors” used in the research. The Oregon-based research team carried out the experimental portion of injecting the gene-editing technology into the embryos and monitoring the results.

Currently, the US permits privately funded research involving embryonic genetic modification in laboratory settings while prohibiting clinical applications. China does not have any restrictions. Korea bans such studies for both research and clinical purposes.