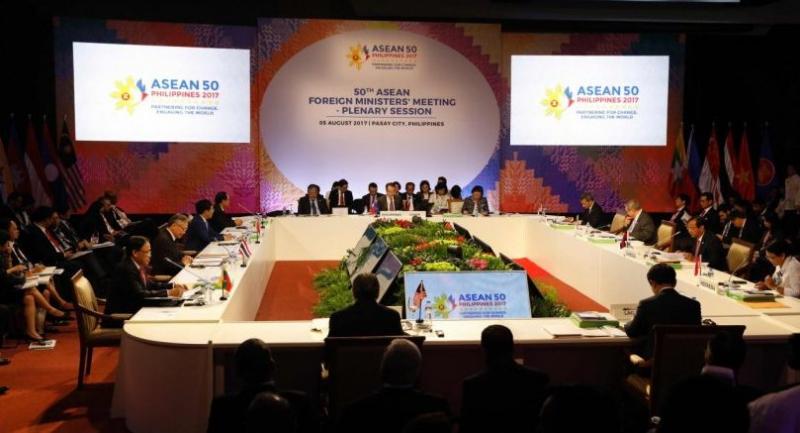 MANILA - Vietnam urged other Southeast Asian nations to take a stronger stand against Chinese expansionism in the South China Sea, as a tense regional security forum began Saturday with North Korea also under fire over its nuclear programme.

Ahead of the launch of the annual gathering of foreign ministers from the 10-member Association of Southeast Asian Nations (ASEAN), Vietnam made a bold play against China with a raft of suggested changes to a planned joint communique.

It set the stage for a fiery few days of diplomacy in the Philippine capital, with the top diplomats from China, the United States, Russia and North Korea to join their ASEAN and other Asia-Pacific counterparts for security talks from Sunday.

The meetings will take place as the United Nations Security Council votes this weekend on a US-drafted resolution to toughen sanctions against North Korea to punish the isolated regime for its missile tests.

The United States said it would also seek to build unified pressure on the North at the Manila event -- known as the ASEAN Regional Forum.

After their own day of meetings on Saturday, ASEAN foreign ministers released a joint statement expressing "grave concerns" over the North's first two intercontinental ballistic missile tests that were conducted last month.

"These developments seriously threaten peace, security and stability in the region and the world," the statement said.

But on the South China Sea dispute -- one of Asia's other top powder keg issues -- there was far less consensus with Vietnam resisting efforts by the Philippines to placate Beijing, diplomats told AFP.

Vietnam on Friday night sought to insert tough language against China in an ASEAN statement that was scheduled to be released after the Southeast Asian ministers wrapped up their own talks on Saturday.

According to a copy of a draft obtained by AFP, Vietnam lobbied for ASEAN to express serious concern over "construction" in the sea, in reference to China's ramped up building of artificial islands in the disputed waters in recent years.

Vietnam also wanted ASEAN to insist in the statement that a planned code of conduct for the sea with China be "legally binding", which Beijing opposes.

"The discussions were really hard. Vietnam is on its own to have stronger language on the South China Sea. Cambodia and Philippines are not keen to reflect that," one diplomat involved in the talks told AFP.

China claims nearly all of the strategically vital sea, including waters approaching the coasts of Vietnam, the Philippines, Malaysia and Brunei.

China has in recent years expanded its presence in the sea by building the artificial islands, which are capable of holding military bases.

Alongside Vietnam, the Philippines used to be the most vocal critic of Beijing's expansionism.

But, under President Rodrigo Duterte, the Philippines has sought to downplay the dispute with China in return for billions of dollars in Chinese investments and aid.

China has in recent years also successfully lobbied other ASEAN nations, particularly Cambodia, to support its diplomatic manoeuvring in the dispute.

Various diplomats said that Vietnam was likely to lose its battle to insert the strong language against China, with the Philippines as host of the talks wielding greater influence.

ASEAN is set to this weekend adopt a framework for a code of conduct with China, which is meant to pave the way for more concrete action.

But security analysts point out that the framework comes 15 years after negotiations on the issue first began, and China has used that time to cement its claims with the artificial islands.

Another pressing issue in Manila will be the growing terrorism threat in the region.

The event is taking place as Philippine security forces battle Islamic State-aligned gunmen who have since May been occupying parts of Marawi, the nation's main Muslim city about 800 kilometres (500 miles) to the south of Manila.

US Secretary of State Rex Tillerson is also set to meet Duterte on the sidelines of the event, with those talks expected to cover the Philippine president's controversial drug war that has claimed thousands of lives.