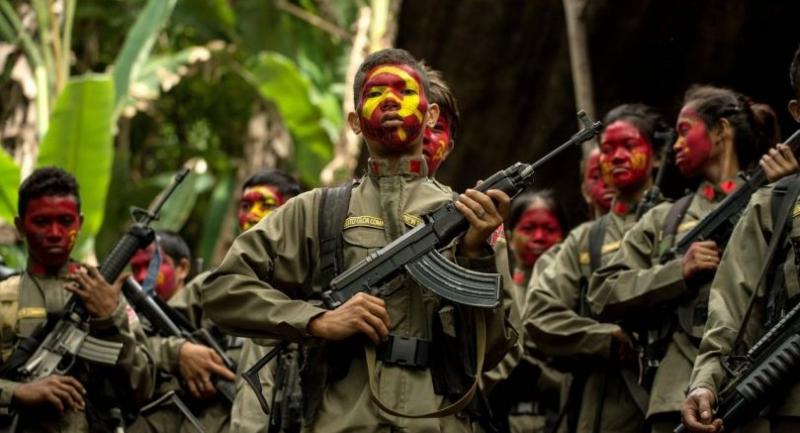 AT A GUERRILLA CAMP, Philippines - A kerosene lamp flickers beside a Macbook in a jungle camp as ageing Philippine communist leader Jaime Padilla plots the next step in one of Asia's oldest insurgencies with a new generation of fighters.

"There's a big pool of young people who will pursue the people's war even if it takes us a hundred or more years," 70-year-old Padilla, one of the Philippines' most-wanted men, said at a rare news conference for a small group of reporters. Padilla, who joined the New People's Army a few years after the insurgency began in the late 1960s, insisted the rebels were not concerned by President Rodrigo Duterte's threats to end peace talks.

A self-proclaimed socialist, Duterte swiftly launched negotiations with the Maoists after winning presidential elections last year and there were high hopes he could end the rebellion, which the military estimates has claimed 30,000 lives.

But last month Duterte angrily declared there would be no more talks because the NPA continued to extort money from businesses and ambush security forces.

Padilla, a slight, bespectacled ex-farmer who goes by the alias "Ka (Comrade) Diego", heads the Melito Glor Command, one of the most important units of the NPA, the communists' 3,800-member armed wing, military commanders told AFP. The unit operates across the south of the main island of Luzon, the country's industrial heartland that lies next to the capital of Manila, typically attacking isolated security outposts and taking guns from slain police and soldiers.

The guerrillas sleep in hammocks near streams and rural hamlets, help farmers harvest crops, and melt into nearby forests to evade any approaching large military forces.

They choose only to fight smaller units, according to Padilla.

His press conference was held on a hilltop ringed with wild banana plants, about two hours' hike from a poor, coconut-growing hamlet. Most also had on thick red makeup, many decorated with the hammer-and-sickle communist logo rendered in yellow, to conceal their identities.

While their numbers are relatively small, there continue to be frequent reports of communists killing security forces across the Philippines.

Last month the rebels killed six policemen and a civilian in an ambush on the central island of Negros, according to the police, and wounded five of Duterte's military bodyguards in another encounter in the southern Philippines.

Padilla said the rebels wanted the talks, held in Europe, to continue. But they stood ready to fight.

"We've been fighting for 50 years. What does it matter if it takes another 50 years," said Padilla, who gave a slide presentation by lamplight with the help of a young female guerrilla.

Padilla defended the continuing NPA attacks, calling them a form of "self-defence" against military operations in areas where their shadow government was in place.

He also insisted it was legitimate to demand the equivalent of two per cent of any business project in revolutionary taxes, but admitted companies that refused to pay were punished "harshly", with their equipment usually burnt.

The payments are vital to the communists' survival.

They net the rebels up to two billion pesos each year, Philippine military spokesman Brigadier-General Restituto Padilla, no relation to the rebel leader, told AFP, branding the practice plain "extortion". "This paralyses the local economies, keeps people poor and makes it easier to recruit them. It's a vicious cycle," the general said.

Another key reason that the Philippines continues to host a communist rebellion when Marxism has dissolved almost everywhere else around the world is an economic system that has created huge wealth but left tens of millions in deep poverty.

The Philippines has one of the fastest growing economies in Asia and has grown by more than six per cent for much of the past decade.

But 22 million, or one in five Filipinos, continue to earn a dollar or less each day, according to government data.

This made the NPA a viable option even for fresh graduates of the country's top universities, he added.

One of them, a 25-year-old from a middle-class family who called herself Ka Kathryn, told AFP she joined the NPA five years ago after her father, an engineer, was fired for organising a union at an energy company.

"We are facing an enemy who has committed atrocities against the people," said Kathryn, who had studied to become a television presenter but now carries an M-16 rifle.

"We should stand up to them and not cower in fear."