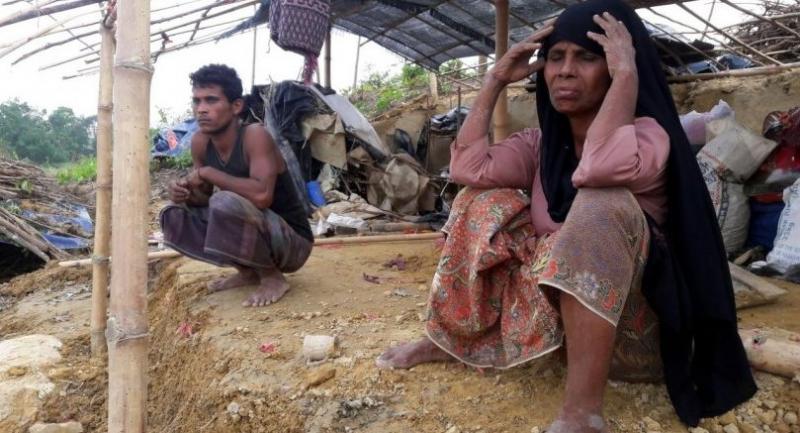 This file photo taken on May 31, 2017 shows a Rohingya refugee sitting near a house destroyed by Cyclone Mora in a camp in the Cox's Bazar in squalid camps in Bangladesh.

They said at least 500 Rohingya had made the difficult journey into Bangladesh, some claiming they had been abused by soldiers in Myanmar.

The latest influx follows a months-long bloody military crackdown on the mainly Muslim minority in Myanmar last year that led tens of thousands to flee across the border. The United Nations has said the violence may amount to ethnic cleansing.

Abu Toyyob said he escaped with his seven-member family as the army vandalised Rohingya houses and detained young men.

"They arrested my younger brother from home and injured my two-year-old son by kicking him with boots," the 25-year-old told AFP.

"I immediately set off with my family and crossed the Naf two nights ago," he added, referring to the river that divides the two countries.

Dhaka estimates that nearly 400,000 Rohingya refugees are living in squalid refugee camps and makeshift settlements in the resort district of Cox's Bazar, which borders Rakhine.

Their numbers swelled last October when more than 70,000 Rohingya villagers began arriving, bringing stories of systematic rape, murder and arson at the hands of Myanmar soldiers.

Bangladesh border guards said they had stepped up patrols after reports of a military build-up on the other side of the river.

Last week, the UN special rapporteur Yanghee Lee voiced alarm at reports that an army battalion had flown into Rakhine to help local authorities boost security in the region.

Buddhist-majority Myanmar has long faced criticism for its treatment of the more than one million Rohingya who live in Rakhine, who are seen as interlopers from Bangladesh, denied citizenship and access to basic rights.

But they are also increasingly unwelcome in Muslim-majority Bangladesh, where police often blame them for crimes such as drug trafficking.

Dhaka has floated the idea of relocating tens of thousands of Rohingya refugees to a remote, flood-prone island off its coast, despite opposition from rights groups.

An official with the UN International Organisation for Migration (IOM), which looks after settlements for unregistered Rohingya refugees, said the organisation was aware of new arrivals.

The numbers were "not as alarming as the October influx," the official said.