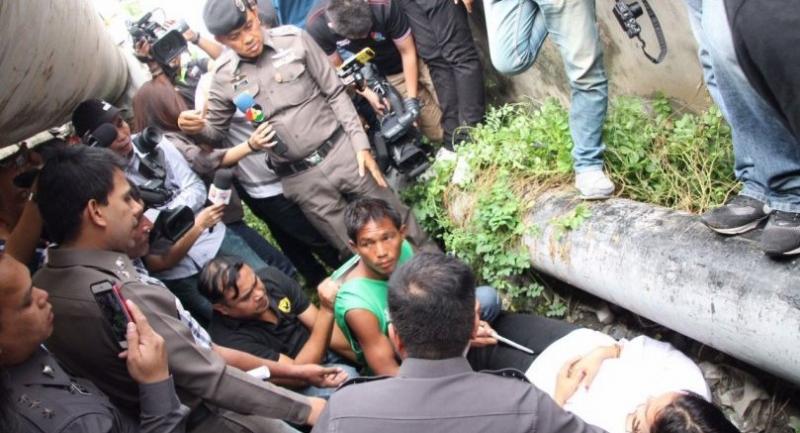 Police have arrested two Myanmar men who allegedly killed a 25-year-old female compatriot who refused to have sex with them, city police chief Lt-General Sanit Mahathavorn told a press conference on Tuesday morning.

The men are allaged to have disposed of their victim’s body down a sewer manhole in Bangkok’s Prawet district on the night of August 15.

Tin Win Aung, 21, was arrested on August 28 in Tak’s Mae Sot district and other man identified only as Juay, 31, was arrested on the same day at a house in Bangkok where police also found the alleged murder weapon, a seven-inch knife.

The duo confessed killing the young woman after she refused to have sex with them, Sanit told reporters at the Prawet precinct. The suspects told police that they had been drinking alcohol with the woman, who had been Juay’s friend for three years, on the evening of August 15. They then went to an area under a bridge to take yaba pills together. The duo then asked to have sex with the woman, but she refused and they attacked her.

When she fought back, Aung punched her. Juay then stabbed her with the knife before Aung slit her throat. The duo put the body in the sewer and separately fled, Sanit said.

A police investigation found that Aung had been prosecuted and jailed for three years in his home country for a murder committed at the age of 16, Sanit said.

The two suspects were brought out to perform a 20-minute re-enactment of the crime at the scene, while the victim’s relatives and other onlookers looked on.

The victim’s body was found in the 1.5-metre-wide manhole under the bridge of Krathum Suapla Temple near the Onnut-Lat Krabang Road on the night of August 16.

She had been stabbed twice on the right side and three times on the left side of her chest, and her throat was slit.