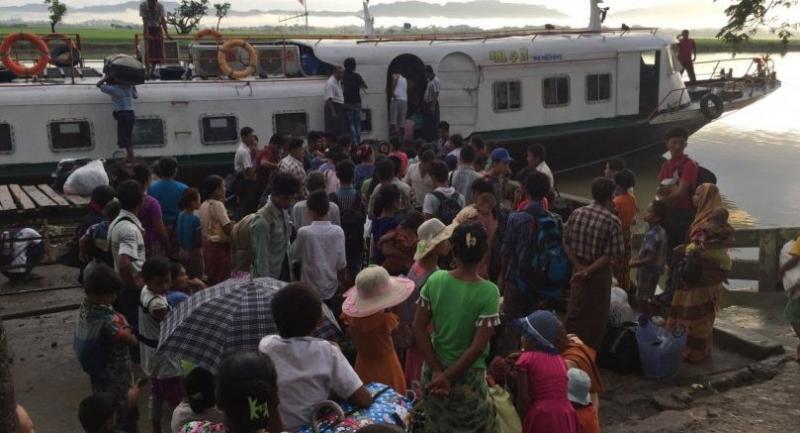 This photo taken on September 1, 2017 shows people displaced from communal violence boarding a boat at the Buthidaung jetty as they flee south to the city of Sittwe, Rakhine State./AFP

YANGON - The World Food Programme has suspended food aid in Myanmar's violence-scorched Rakhine State, as the humanitarian situation deteriorates with a surging death toll and tens of thousands -- both Rohingya Muslims and ethnic Buddhists -- on the move.

Relief agencies, including WFP, have repeatedly been accused by Myanmar authorities of allowing their rations to fall into the hands of Rohingya militants, whose attacks on police posts on August 25 sparked the current violence.

Around 120,000 people -- most of them Rohingya Muslim civilians -- have relied on aid hand-outs in camps since 2012, when religious riots killed scores and sparked a crisis which is again burning through the state.

Over the last five years Rakhine state has been cut along ethnic and religious lines, but the current violence is the worst yet.

Aid agencies are routinely accused of a pro-Rohingya bias and the sudden flare-up of unrest has renewed safety concerns, prompting relief work to be pulled back.

"All WFP food assistance operations in Rakhine State have been suspended due to insecurity... affecting 250,000 internally displaced and other most vulnerable populations," the WFP said in statement.

"We are coordinating with the authorities to resume distributions for all affected communities as soon as possible, including for any people newly affected by the current unrest."

The Rohingya, branded illegal immigrants in Myanmar and mostly denied citizenship, make up the vast majority of the dead and displaced since 2012.

In the ongoing bout of violence, 40,000 Rohingya have fled to Bangladesh, according to the UN.

Tens of thousands have been turned away by Bangladeshi border officials, while scores have died trying to cross the Naf river -- a natural frontier between the two countries -- in basic boats and even on flotsam.

On Friday, Myanmar's army chief said nearly 400 people have died in the violence, among them 370 Rohingya militants, and 11,000 ethnic Rakhine Buddhists, Hindus and other minority groups have also been internally displaced.

Accounts from Rohingya survivors in Bangladesh and Buddhists who fled to Sittwe, the Rakhine state capital, indicate the death toll may be much higher.

The worst-hit areas are off-limits to reporters. But unverifiable testimony has trickled out, telling of tit-for-tat mass killings and villages being torched by the army and the militants.

As violence spins out of control, food and medical relief have been stopped to many already languishing in basic camps, according to the Pierre Peron, spokesperson for the UN Office for the Coordination of Humanitarian Affairs.

"Humanitarian aid normally goes to these vulnerable people for a very good reason, because they depend on it," he said in a statement, adding disruption to the relief chain "has a very real human impact."

UN secretary-general Antonio Guterres on Friday warned the spiral of violence could lead to a "humanitarian catastrophe" and urged Myanmar's government to provide security for aid agencies to reach those in need.

Shortly before his comments, aid groups were again spotlighted by army chief Min Aung Hlaing, whose office said WFP-labelled food and medicines had been found with dead militants.

The militants are fighting under the banner of the Arakan Rohingya Salvation Army (ARSA), who say they are defending their minority group from persecution by Myanmar.

The ARSA emerged as a force in October last year when their attacks killed Myanmar border police, prompting a crackdown by security forces which the UN says may have amounted to ethnic cleansing.