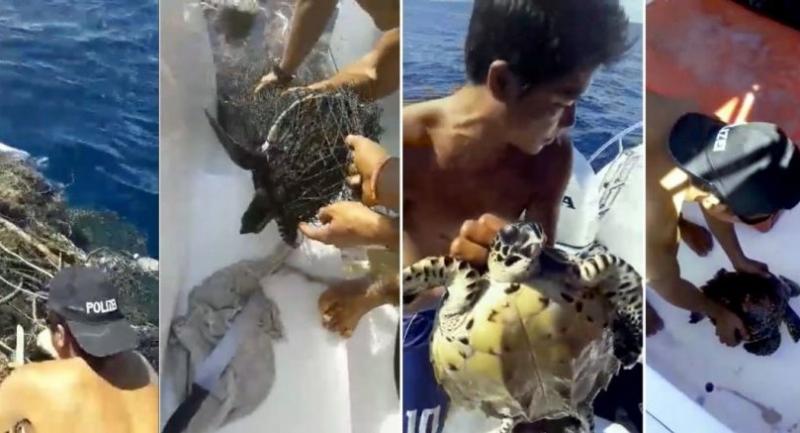 Two hawksbill sea turtles, which were found entangled in a fishing net drifting between Koh Racha and Ao Chalong in Phuket province on Tuesday afternoon, have been rescued and sent to the Department of Marine and Coastal Resources’ Phuket Marine Biological Centre.

A video clip of the rescue was posted on the Facebook page of “Hakhraisakkon Thirujai”, who was later identified as an employee of Nikorn Marine Co Ltd.

Company staff on board the Nikorn Marine 824 boat cut loose the two turtles and sent them to the centre for their injuries to be treated before they will be released back into the sea, according to the company’s marketing manager, Budsayarin Wutthinonchai.

Healthy Reefs Club president Khanchit Khlingkhob, who received the sea turtles from the company’s staff and brought them to the centre, said they were about five years old with shells about 30 centimetres by 25cm.

This year there has been an increase in the number of sea turtles being caught in fishing nets as the animals have been attracted by the healthy ecosystem at Koh Racha and the nearby area, which has benefited from conservation efforts, Khanchit said.

The fishing net may have been left floating in the sea while fishing boats performed repairs while docked in the area. Tour boats have previously rescued turtles and released healthy ones back into the sea while sending the wounded ones to the authorities for treatment, he added.