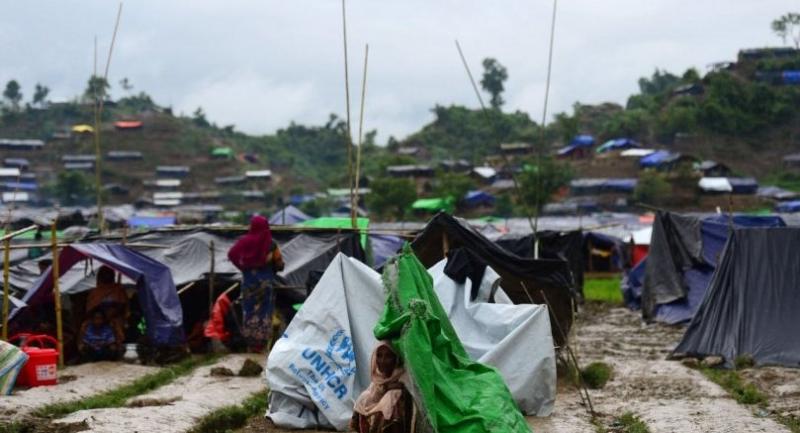 A Rohingya refugee woman sits next to a newly built makeshift shelter in a camp in the Bangladeshi locality of Ukhia on September 9, 2017. // AFPPHOTO

COX'S BAZAR, Bangladesh - The situation in Myanmar is a "textbook example of ethnic cleansing", the United Nations rights chief said on Monday, as the number of Rohingya Muslims fleeing the country for Bangladesh topped 300,000.

The UN warning came as it emerged the Dalai Lama had written to Aung San Suu Kyi urging Myanmar's de facto civilian leader to find a peaceful solution to the crisis in the mainly Buddhist country.

The Rohingya, a stateless Muslim minority, have faced decades of persecution in Myanmar where they are regarded as illegal immigrants.

But since the latest upsurge in violence on August 25, hundreds of thousands have flooded across the border into Bangladesh bringing stories of entire villages burned to the ground by Buddhist mobs and Myanmar troops.

On Monday the UN human rights chief Zeid Ra'ad Al Hussein accused Myanmar of waging a "systematic attack" on the Rohingya and warned that "ethnic cleansing" seemed to be under way. Rohingya refugees try to get a mosquito net and a bowl as a relief from an organisation in the streets of Teknaf, Bangladesh, 10 September 2017.  // EPA-EFE

"Because Myanmar has refused access to human rights investigators the current situation cannot yet be fully assessed, but the situation seems a textbook example of ethnic cleansing," he told the UN Human Rights Council.

Suu Kyi, a Nobel peace laureate, has come in for strong international criticism over the military crackdown on the Rohingya, which began when militants ambushed security forces on August 25.

The UN special rapporteur on human rights in Myanmar has said the latest violence may have left more than 1,000 dead, most of them Rohingya.

A further 27,000 ethnic Rakhine Buddhists as well as Hindus have also fled violence that has gripped northern Rakhine, where international aid programmes have been severely curtailed.

On Monday it emerged that the Dalai Lama had joined fellow Nobel peace laureates Malala Yousafzai and Archbishop Desmond Tutu in urging Suu Kyi to intervene.

"Questions that are put to me suggest that many people have difficulty reconciling what appears to be happening to Muslims there with Myanmar's reputation as a Buddhist country," the Tibetan spiritual leader wrote in a letter to Suu Kyi shortly after the latest fighting broke out.

"I appeal to you and your fellow leaders to reach out to all sections of society to try to restore friendly relations throughout the population in a spirit of peace and reconciliation."

The UN refugee agency says at least 313,000 Rohingya have now arrived in Bangladesh from Myanmar's Rakhine state since August 25, around a third of the total population of 1.1 million. The true figure could be even higher -- the UN said many new arrivals are still on the move and are therefore left out of the calculations.

Most have walked for days and the United Nations says many are sick, exhausted and in desperate need of shelter, food and water.

Safura Khatun, 60, was among the hundreds who crossed into Bangladesh on Monday.

She told AFP it had taken her 15 days to reach Bangladesh from her village south of Maungdaw, where her husband and three sons had been killed.

"I had only water for the last five days," she said, rocking on the spot in a yellow headscarf.

"I don't know what I will do here. We will follow the others."

Refugee camps and makeshift settlements near the border with Myanmar already hosted hundreds of thousands of Rohingya before the latest influx and are now completely overwhelmed.

That has left tens of thousands of new arrivals with nowhere to shelter from the monsoon rains.

Dhaka, which initially tried to block the Rohingya from entering, said Monday it would start registering all new arrivals.

The Bangladesh government plans to build a huge new camp that will house a quarter of a million refugees.

It remains unclear when or whether they will be able to return.

The UN's Zeid said he was "appalled" by reports that Myanmar security forces were laying mines near the border to stop the Rohingya returning.

Three Rohingya are reported to have been killed by a mine, and at least two more have lost limbs. One of the victims was a young boy.

There was no immediate response from Myanmar's military, but on Saturday authorities said they would set up three relief camps in Rohingya-majority areas.