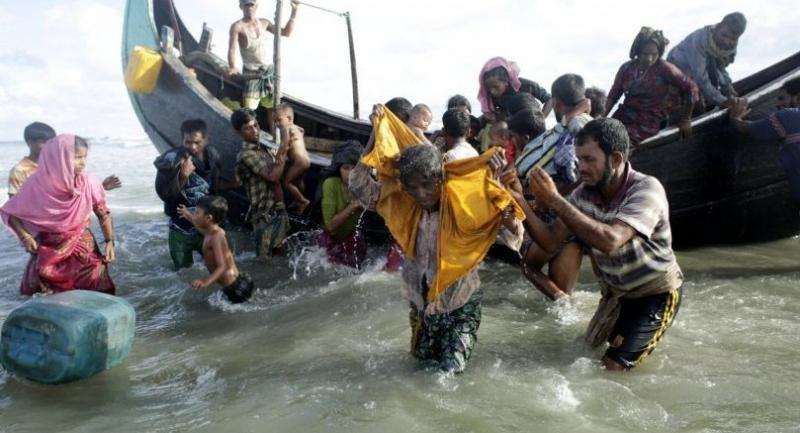 Rohingya Refugees walk towards the shore of Naf river as people arrive by boats, in Teknaf, Bangladesh on September 13.//EPA-EFE

United Nations, US - The UN Security Council on Wednesday broke its weeks-long silence on the crisis in Myanmar and called for an end to the violence as UN chief Antonio Guterres said the military campaign amounted to ethnic cleansing of Rohingya Muslims.

Following a closed-door meeting, the 15-member council including China, a supporter of Myanmar's former ruling junta, expressed concern about excessive force during security operations in Rakhine state and called for "immediate steps" to end the violence.

It was the first time the council agreed on a united response to the crisis sparked by a military crackdown that followed attacks by Rohingya militants late last month.

Some 380,000 Rohingya have fled across the border into neighboring Bangladesh and there have been growing appeals for Myanmar's leader Aung San Suu Kyi to speak out in defence of the Rohingya.

Suu Kyi's spokesman earlier said the Nobel laureate and long-time human rights champion would deliver an address next week on peace and reconciliation in Myanmar.

At a press conference in New York, Guterres called for a halt to the military campaign in Rakhine and said the mass displacement of Rohingya amounted to ethnic cleansing.

"I call on the Myanmar authorities to suspend military action, end the violence, uphold the rule of law and recognize the right of return of all those who had to leave the country," the secretary general told a press conference.

The 1.1-million strong Rohingya have suffered years of discrimination in Myanmar, where they are denied citizenship even though many have longstanding roots in the country.

Guterres said the Myanmar government should either grant the Rohingya nationality or legal status that would allow them to live a normal life.

Condemning the violence, the Security Council also called for humanitarian aid workers to be able to reach those in need in Rakhine state.

But China blocked a proposal from Egypt to add language on ensuring the right of return to the Rohingya sheltering in Bangladesh, diplomats said.

Still, British Ambassador Matthew Rycroft stressed that it was the first time in nine years that the Security Council was able to agree on a common stance on Myanmar.

"We were united in our concern about the situation" after hearing from UN officials who briefed the council on "the catastrophe that is befalling Rakhine state and the Rohingya there," said Rycroft.

Rights groups had urged the council to meet in open session and send a clear message to Myanmar that the world is watching.

"Today was a baby step forward, and it's admittedly rare that the Council finds a way to agree on Burma, but it's far less than what's needed in the face of the unfolding tragedy," said Akshaya Kumar, Human Rights Watch's deputy UN director.

In the northern area of Rakhine, 176 out of 471 Rohingya villages now stand empty after "the whole village fled", government spokesman Zaw Htay said in Yangon, adding others were partly deserted or intact.

- Suu Kyi stays away from UN -

Suu Kyi, who will deliver a nationwide address on September 19, has been condemned for a lack of moral leadership and compassion in the face of a crisis that has shocked the international community.

The Myanmar leader's spokesman said she will not attend next week's annual meeting of world leaders at the United Nations, where the plight of the Rohingya will be in the spotlight.

On the sidelines of the General Assembly, Turkey is planning a meeting of the Organization of the Islamic Conference (OIC) on Myanmar and Britain a ministerial-level meeting.

Bangladesh is struggling to provide relief for exhausted and hungry refugees -- some 60 per cent of whom are children -- while nearly 30,000 ethnic Rakhine Buddhists as well as Hindus have also been displaced inside Myanmar.

Nine thousand more Rohingya refugees poured into Bangladesh on Wednesday, the UN said, as authorities worked to build a new camp for tens of thousands of arrivals who have no shelter.

Suu Kyi, Myanmar's first civilian leader in decades, has no control over the powerful military, which ran the country for 50 years. A free election was finally held in 2015.

There is also scant sympathy among Myanmar's Buddhist majority for the Rohingya, who are branded "Bengalis" -- shorthand for illegal immigrants.

Rohingya refugees have told chilling accounts of soldiers firing on civilians and razing entire villages in the north of Rakhine with the help of Buddhist mobs.

The army denies the allegations.

Ahead of the council meeting, 12 Nobel laureates signed an open letter urging the UN body to "intervene immediately by using all available means" to end the "crimes against humanity" unfolding in Rakhine.

Suu Kyi made her debut before the UN assembly last September, winning warm applause for a speech in which she vowed to find a solution to long-running ethnic and religious hatred in Rakhine.//AFP