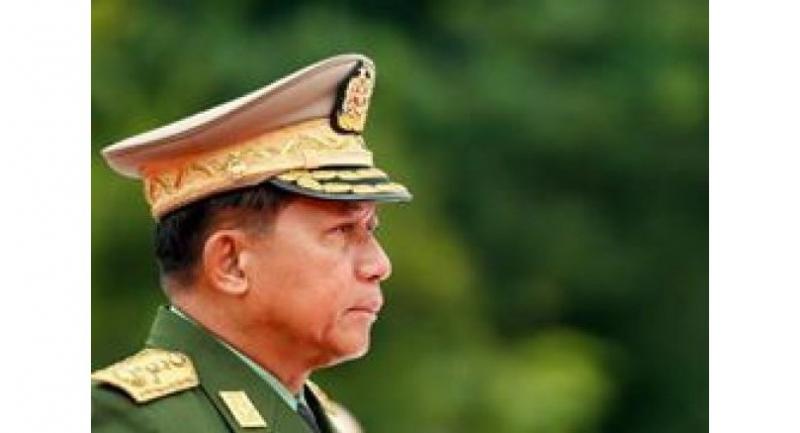 YANGON - Myanmar's army chief has urged the country to unite over the "issue" of the Rohingya, a Muslim group he says has no roots in the country, and which his troops are accused of systematically purging.

The military says its "clearance operations" in northern Rakhine state are aimed at taking out Rohingya militants who attacked police posts on August 25.

But the violence has engulfed the border region and triggered an exodus of more than 400,000 Rohingya to Bangladesh, where they have told of soldiers slaughtering civilians and burning down entire villages.

UN leaders have described the campaign as having all the hallmarks of "ethnic cleansing" of the Rohingya, a stateless group that has endured years of persecution and repression.

The status of the Muslim minority has long been an explosive topic in Myanmar.

Many in the Buddhist majority view the group as foreign interlopers from Bangladesh and deny the existence of a Rohingya ethnicity, insisting they be called "Bengalis".

"They have demanded recognition as Rohingya, which has never been an ethnic group in Myanmar. (The) Bengali issue is a national cause and we need to be united in establishing the truth," the post said.

The defence of his army's operations comes amid strident global condemnation of the violence, which has left Bangladesh with the overwhelming task of providing shelter and food to a rising tide of desperate refugees.

But she has been castigated for failing to voice sympathy for the Rohingya -- a group she has asked her government to refer to only as "Muslims of Rakhine state".

All eyes will be on the Nobel laureate as she addresses the nation on the crisis for the first time Tuesday, a high-stakes speech that many outside the country hope will explain her near silence on the human tragedy that is unfolding.

The US has dispatched an envoy to Myanmar to express its "grave concern" with the violence in Rakhine, a US State Department official told AFP.

Patrick Murphy, Deputy Assistant Secretary for Southeast Asia, will meet with government leaders and travel to the state capital of Rakhine but not the conflict zone further north, the official said.

The US was a key partner in pushing along Myanmar's democratic transition, which saw the army step down from 50 years of brutal junta rule and allow the free elections in 2015 that swept Suu Kyi into office.

The army still plays a powerful role in politics, with control over key ministries like borders and defence, plus a quarter of parliament.

Suu Kyi's supporters inside the country, where she still enjoys saint-like status for her democracy struggle, have balked at the global criticism heaped on their leader and argued she must tread carefully around a military that still looms large in the fragile democracy.