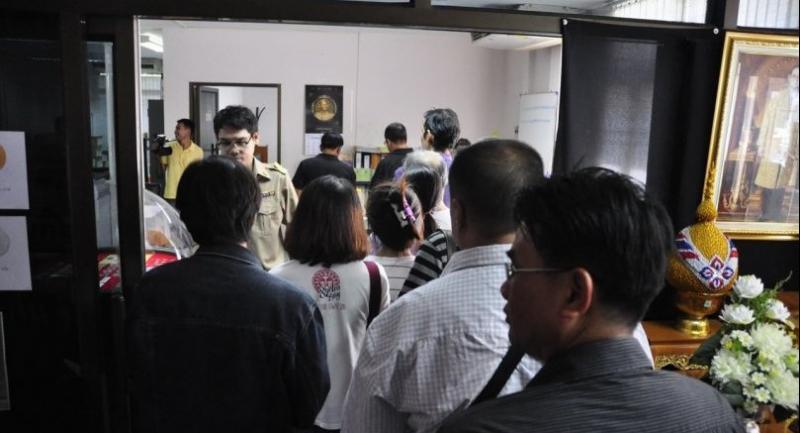 The second batch of commemorative coins minted for the funeral of His Majesty the late King Bhumibol Adulyadej have proved very popular after being available for reservations on Monday.

Long queues were seen since early in the morning at designated venues nationwide.

In Songkhla's Muang district, a Prince of Songkhla University worker, Chulalak Khongkan, arrived at the Songkhla Treasury Office at about 4am.

She got the first queue card to purchase the sandblasted, black-coated bronze coin, which costs Bt3,000.

"I couldn't reserve a bronze coin in the first batch's reservation period so I was determined to get it this time,” she said.

“I left my house at 3am to ensure a better shot at getting an early queue card. I want to keep the bronze coin as a once-in-a-lifetime event souvenir.”

The coins are so popular that only 18 people could reserve them online from this Songkhla office within 10 minutes of them being available.

The coins were fully booked within 10 minutes of opening, with only 15 people making reservations from this office, said office head Samran Muangnin, adding that the fast reservation rate was fuelled by all banks in the province being able to take reservations.

In Phitsanulok province, many people started arriving at about 5am to make reservations.

Muang Phitsanulok resident Chansri Laopakorn, 62, who obtained the first queue card, said she came to the office at 6pm on Sunday to camp outside overnight in the rain with friends.

The Bt100 cupronickel coin from the first batch was not minted this time as there are still 23 million left.

According to Treasury Department chief Patchara Anuntasilpa, the coins from both batches will be available in January - except for the second batch's bronze coin, which will be ready in July due to them being handmade.

Patchara said that the department will not produce any more commemorative coins for the late King's funeral.

A portrait of the late monarch in court regalia appears on one side of the coins along with his name in Thai.

On the reverse side are a depiction of the crematorium being erected at Sanam Luang for him, the royal cypher of King Rama IX and a Thai inscription, “The royal funeral ceremony on Thursday, October 26, BE 2560”.