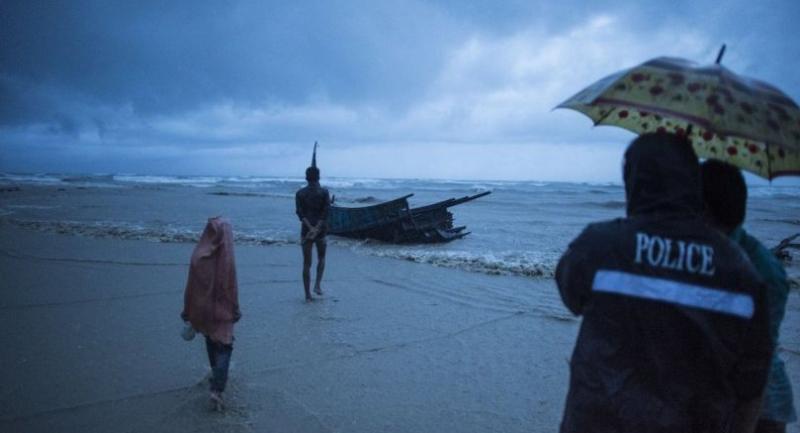 People come to see the boat where Rohingya Muslim refugees were found dead on the shore of Inani beach, near Cox's Bazar on September 28, 2017. /AFP

The growing Rohingya refugee crisis prompted the UN Security Council to hold a rare public meeting on Myanmar, with the US slamming the country for trying "to cleanse the country of an ethnic minority" while Beijing and Moscow backed the Myanmar authorities.

More than half a million Rohingya Muslims have fled to Bangladesh in the last month, after the military in Buddhist-majority Myanmar launched vicious operations against Rohingya rebels.

Witnesses and survivors said the vessel that overturned Thursday was just meters from the coast in rough waters, after it was lashed by torrential rain and high winds.

Local police inspector Moahmmed Kai-Kislu told AFP 15 bodies including at least 10 children and four women had so far washed ashore, and there were fears the number could still rise.

"They drowned before our eyes. Minutes later, the waves washed the bodies to the beach," said Mohammad Sohel, a local shopkeeper.

Seven of the UN's 15-member Security Council voted to hold the body's first public meeting on Myanmar since 2009, though they failed to arrive at a joint resolution.

"The situation has spiraled into the world's fastest developing refugee emergency, a humanitarian and human rights nightmare," he said, while calling for those displaced from the conflict to be allowed to return home.

The UN chief noted that the "systemic violence" could cause unrest to spill into the central part of Myanmar's Rakhine state, threatening 250,000 Muslims with displacement.

A donors' conference would be held on October 9, he said.

Some of the strongest criticism came from US envoy Nikki Haley, who said: "We cannot be afraid to call the actions of the Burmese authorities what they appear to be: a brutal, sustained campaign to cleanse the country of an ethnic minority.

"And it should shame senior Burmese leaders who have sacrificed so much for an open, democratic Burma," she added, in what appeared to be a rebuke to the country's Nobel Peace Prize-winning leader Aung San Suu Kyi, whose reputation as a human rights champion has been left battered by the crisis.

Burma is an alternative name for Myanmar.

Haley warned: "We must now consider action against Burmese security forces who are implicated in abuses and stoking hatred among their fellow citizens."

"The international community must be aware of the difficulties faced by the Burmese government, be patient and provide its assistance," Chinese envoy Wu Haitao said.

"We must be very careful when we talk about ethnic cleansing and genocide," added Russian ambassador Vassily Nebenzia, shifting the blame toward Rohingya militants for "burning villages."

Myanmar's representative U Thaung Tun insisted there was "No ethnic cleaning, no genocide in Myanmar," while Bangladeshi ambassador Masud Bin Momen called for the creation of safe zones within Myanmar to allow refugees to return home.

The latest drowning tragedy comes after a series of deadly accidents as desperate refugees surge across the two countries' shared border.

The International Organization for Migration, which is leading the relief effort, told AFP one survivor said the boat sank as it tried to dock at a place that was out of sight of security forces.

"It's a very sad story. There were a hundred Rohingya on board when it sank," IOM spokesperson Hala Jaber told AFP.

One distraught survivor told AFP that his wife and one of their children had been killed when the ship sank.

"The boat hit something underground as it came close to the beach. Then it overturned," said Nurus Salam, who had set off set off for Bangladesh from a coastal village in Myanmar late Wednesday with his family.

The UN's refugee agency (UNHCR) said 27 survivors had been located so far, including eight women and seven children.

The exodus began on August 25 when attacks by Rohingya militants on security posts prompted a Myanmar military crackdown.

It has created a humanitarian crisis as the government and aid agencies struggle to provide food, clean water and shelter.

Those who have made it to Bangladesh have brought with them harrowing accounts of murder and villages torched by Myanmar soldiers and mobs of ethnic Rakhine, who are Buddhists.

Rakhine, long a cauldron of ethnic and religious tensions, has been scarred by seething animosity since severe bloodshed erupted across the state in 2012.

The Rohingyas, the world's largest stateless group, are treated as foreigners in Myanmar.