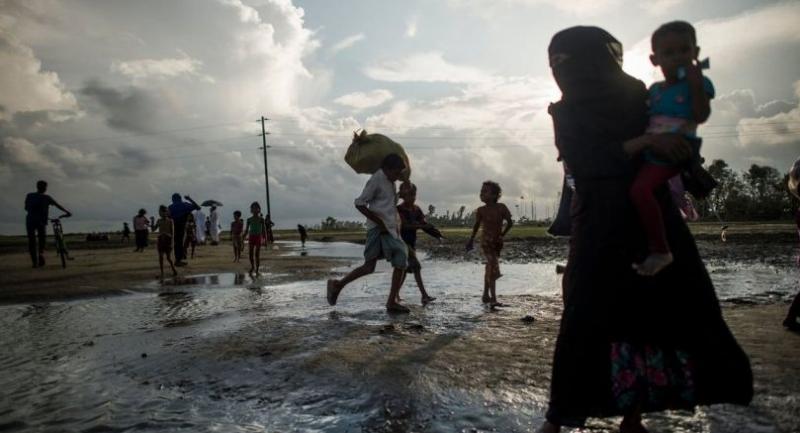 Rohingya Muslim refugees walk to a camp for refugees after crossing the border from Myanmar, in Teknaf on September 29, 2017. / AFP PHOTO

Myanmar yesterday formally proposed taking back the Rohingyas sheltered in Bangladesh but offered no specifics on how the repatriation of such a massive refugee population should take place.

Bangladesh, on the other hand, proposed a bilateral agreement to facilitate the repatriation process and handed over a draft of the proposed deal to a visiting minister of the neighbouring country.

The two sides also agreed to constitute a joint working group on the repatriation of Rohingyas but fixed no timeframe to complete its formation.

Foreign Minister AH Mahmood Ali told reporters about these developments after his over-an-hour talks at the state guesthouse Padma with Kyaw Tint Swe, union minister for the Office of the State Counsellor of Myanmar.

“We are looking forward to a peaceful solution to the crisis,” Mahmood said, adding that the working group will be formed soon. “I am hopeful.”

The talks came at a time when Bangladesh is struggling to cope with an unprecedented influx, termed by the UN one of the fastest growing refugee crises in recent times.

Already 5,07,000 of the Myanmarese minorities crossed over into Bangladesh since late August to escape a military crackdown in Rakhine State.

The UN has denounced the brutal army campaign as a “textbook case of ethnic cleansing”.

"Myanmar has made a proposal to take back the Rohingya refugees," the foreign minister told reporters. "The two sides have agreed to a proposal to set up a joint working group to coordinate the repatriation process."

In reply to a question, he said the composition of the working group will be finalised soon, after both the countries submit names for it.

The group will chalk out detailed repatriation plan through discussions.

Asked about a possible timeframe for the working group's formation, he said, “We need to wait but let's start the discussion.”

Kyaw Tint Swe did not talk to the media and left the state guesthouse around 1:30pm after luncheon.

The Myanmar minister, who arrived here early yesterday, had no other engagement after the meeting. He was scheduled to leave early today by Thai Airways.

“We have handed over a draft of the proposed deal to the Myanmar minister at the meeting,” he said without going into details.

Diplomatic sources said the four-page document contained a detailed plan on how Myanmar can start repatriation of its displaced nationals now staying in Bangladesh.

In its note, Dhaka asked Myanmar to begin the repatriation within the next one month. It also suggested starting the repatriation with the registered refugees, who are already verified by the UNCHR, Myanmar and Bangladesh, and staying at Nayapara and Kutupalong camps under the 1993 agreement.

The three sides have unanimously cleared some 2,415 Rohingyas. Dhaka mentioned this at yesterday's meeting, suggesting that the repatriation should start with these people first.

The foreign minister in his six-minute briefing also said Home Minister Asaduzzaman will soon make a trip to Myanmar, which will help take forward the negotiations with that country.

“There has been a fruitful discussion over border and security issues,” he said, adding that some instruments on better border management are ready to get final shape during the visit.

Asked if the Myanmar minister was sincere about resolving the crisis, a senior official at the foreign ministry said he appeared fully aware of the situation and did not go for any arguments or countering the allegations.

Foreign affairs experts in Dhaka saw yesterday's meeting as a positive development, but noted that Myanmar broke their promises in the past and showed non-cooperative attitude to Bangladesh.

Meeting sources said Dhaka called for an end to the current influx and persecutions of Rohingyas and implementation of Annan Commission's recommendations.

In response, the Myanmar minister claimed there has been no military operation in Rakhine since September 5 and local administration has taken adequate measures to provide safety and security to the Rohingya population.

About the ongoing influx, Kyaw Tint Swe admitted that he heard a few incidents about threats made by ethnic Rakhine community to Rohingyas to leave the country.

He said that the deputy commissioner at Rakhine is visiting the affected areas and giving assurance about the security in place and urging the Rohingyas not to leave the country.

But the Myanmar minister complained that the Rohingyas who have crossed the border are making phone calls to Rakhine and encouraging fellow community members to come to Bangladesh.

He asked the Bangladesh side to look into the matters seriously, meeting sources said.

It may be mentioned that over 6,000 Rohingya people reportedly entered Bangladesh through Ulubunia point in Teknaf yesterday fearing fresh persecutions in Rakhine.

The Annan Commission presented its recommendations on August 24, calling for freedom of movement for all people in Rakhine and a review of the controversial 1982 law under which Rohingyas are denied citizenship.

The Myanmar minister, in response, referred to Suu Kyi's address to her nation last month in which she said she was committed to implementation of Annan Commission's recommendations.

Suu Kyi also said Myanmar was ready to start a verification process under the 1993 agreement with Bangladesh and “refugees from this country will be accepted without any problem”.

Bangladesh was faced with influx of Rohingya refugees from Myanmar also in 1978 and 1991.

In 1978, about 2,00,000 refugees crossed into Bangladesh to flee persecution by the Myanmarese army. The problem was resolved through diplomatic initiatives in sixteen months.

Between mid-1991 and mid-1992, an estimated 2,50,000 refugees took shelter in Bangladesh, but all the refugees except a few thousands were repatriated through a bilateral deal.

A memorandum of understanding was signed on May 12, 1993 between Bangladesh and Myanmar. It allowed UNHCR to have free access to all refugee camps in day time.

Another MoU was signed between Myanmar authorities and the UNHCR on November 5, 1993 to facilitate the voluntary repatriation of Myanmar nationals who were in UNHCR-assisted camps in Bangladesh.

The Myanmar government then pledged that the refugees will be allowed to return to their respective places of origin after necessary verifications.

Myanmar then also said that the returnees will enjoy the same freedom of movement as all other nationals in Rakhine in conformity with the existing laws and regulations.