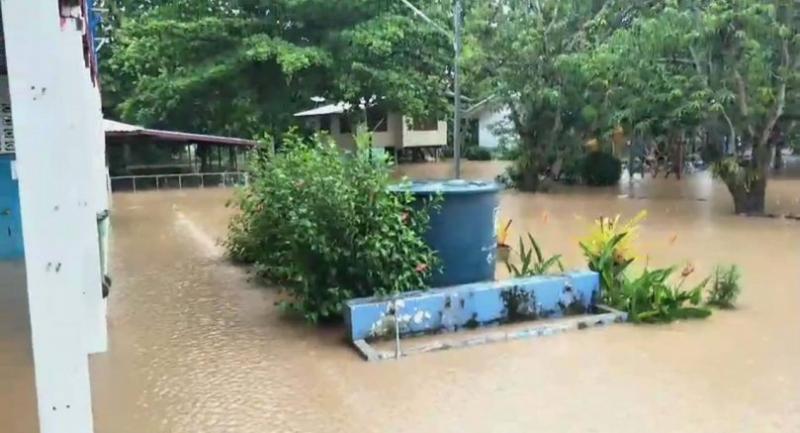 The Ban Nam Pad School in Phitsanulok was hit by flooding again for the 10th time this year.

Mountain run-off caused the Nam Pad Canal to burst its banks and inundate the school in Moo 2 village in Tambon Chomphu of None Maprang district at 5am.

The last time the school was hit by flooding was on September 16 when the water level was as high as two metres.

Ket Tuankrua, the director of the school, said there were heavy rains over the Chomphu Mountain for hours on Monday night.

Rainwater from the mountain caused the canal to overflow at 5am.

He said the lowest point of the flooding was at the teachers' residences and cafeteria which was under 1.5-metres of water.

Since the school is on mid-year holiday, officials had previously made preparations for flooding by moving teaching tools and equipment to shelves or upstairs, so the damage was minimal. He said only some desks and chairs were damaged.

The water started to subside at 9am and teachers and students would help clean up the school in the afternoon, he added.

He said the school has been repatedly flooded because the Phitsanulok-None Maprang road blocked the school gate where the floodwater were supposed to flow out when the Nam Pad Canal overflowed.

The road has only two 80-centimetre drainage pipes built under it that are not large enough to drain floodwater in time.

He said the provincial administration approved a budget of Bt380,000 to build a water tunnel in front of the school but the project was suspended as the school feared that the water would affect local residents on the opposite side of the school.