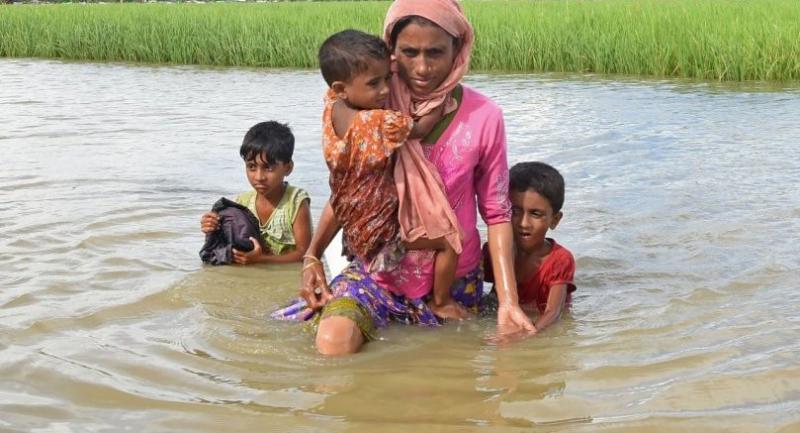 Rohingya refugee Khalida, a mother of three children, wade across a canal near the no man's land area between Bangladesh and Myanmar in the Palongkhali area next to Ukhia on October 18, 2017./AFP

"Despite warnings issued by us and by many other officials, the government of Myanmar has failed to meet its obligations under international law and primary responsibility to protect the Rohingya population from atrocity crimes," said a joint statement.

"The international community has equally failed its responsibilities in this regard," they added.

Since late August more than 500,000 Rohingya have fled an army campaign in Myanmar's Rakhine state that the United Nations has denounced as ethnic cleansing.

The UN Security Council has called on Myanmar to end military operations in Rakhine, grant access to aid workers and allow the safe return of the Rohingya refugees.

The council however has not followed up its appeal with action such as imposing sanctions, a move diplomats said is opposed by China, a supporter of the Myanmar's former junta, and Russia.

"Once again, our failure to stop atrocity crimes makes us complicit. When will we live up to our countless promises of 'never again'?" the advisers asked.

Myanmar authorities argue the military operations in Rakhine are to root out militants following attacks on police posts in late August.

A recent report by the UN human rights office accused Myanmar of seeking to permanently expel the Rohingya, by planting land mines at the border with Bangladesh where the refugees are sheltering.

UN rights officials spoke to refugees who gave accounts of soldiers surrounding homes and firing indiscriminately as residents ran for their lives, and of uniformed men gang-raping women and girls, some as young as five.

"In some cases, before and during the attacks, megaphones were used to announce: 'You do not belong here -- go to Bangladesh. If you do not leave, we will torch your houses and kill you'," the report said.

The UN's top political affairs official, Jeffrey Feltman, returned on Tuesday from five days of talks in Myanmar that failed to yield a breakthrough.

Feltman is expected to report to the Security Council on his talks.